With the release of the second generation professional zoom we have a Sony 24-70mm F2.8 GM Vs Mark II Lens Review for you to compare old and new models. Browse full lens specifications in a comparison table, watch the video review and ogle sample photos to decide whether this is the perfect standard zoom for your needs. 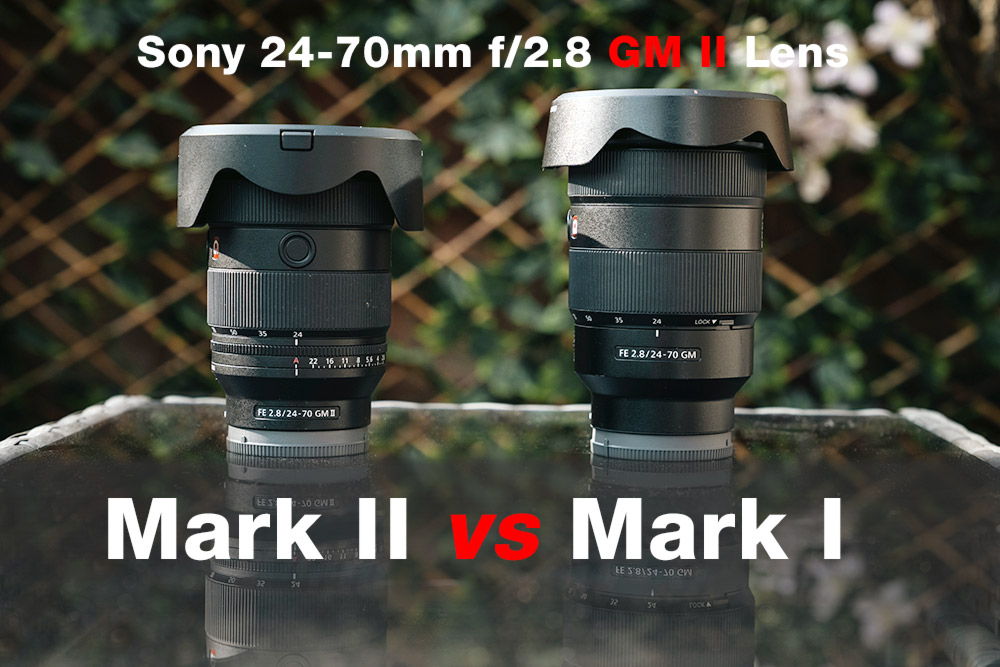 Let’s start by taking a quick look at what a 24-70mm lens is good for, and why this ‘standard’ focal range is so popular. Many photographers and videographers enjoy shooting with prime lenses because of the image quality they can achieve, combined with a fast (wide) aperture. This allows you to shoot at faster speeds as the lens gathers light even in low light situations. A wide aperture also renders a shallower depth of field with smooth out of focus areas to define your subject.

A 24-70mm zoom lens covers several of the most popular prime focal widths of all time, which are 24mm, 35mm and 50mm. It then goes on to reach 70mm for a little extra compression, edging its way towards 85mm, which is extremely popular for classic portraits, lifestyle and fashion. 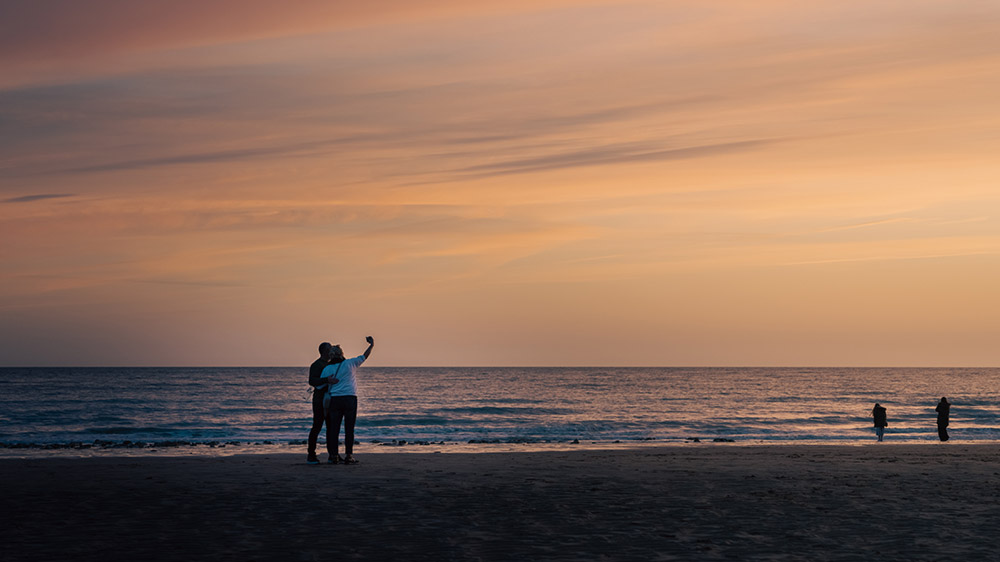 With this zoom range and relatively bright constant f/2.8 aperture, you can shoot a huge number of popular subjects, which include:

It’s the combination of zoom range and fast aperture which makes the 24-70mm lens so popular and the central option in the Holy Trinity of lenses. These encompass three professional zooms, which in Sony’s case are the 16-35mm f/2.8 GM, 24-70mm f2/.8 GM II and 70-200mm f/2.8 II. Having all three in your kit bag allows you to capture virtually any subject with just three lenses and many rely on the 24-70mm as their bread and butter workhorse for numerous situations. That’s not to say you can’t add your favourite primes amongst these focal ranges, which many photographers will do. 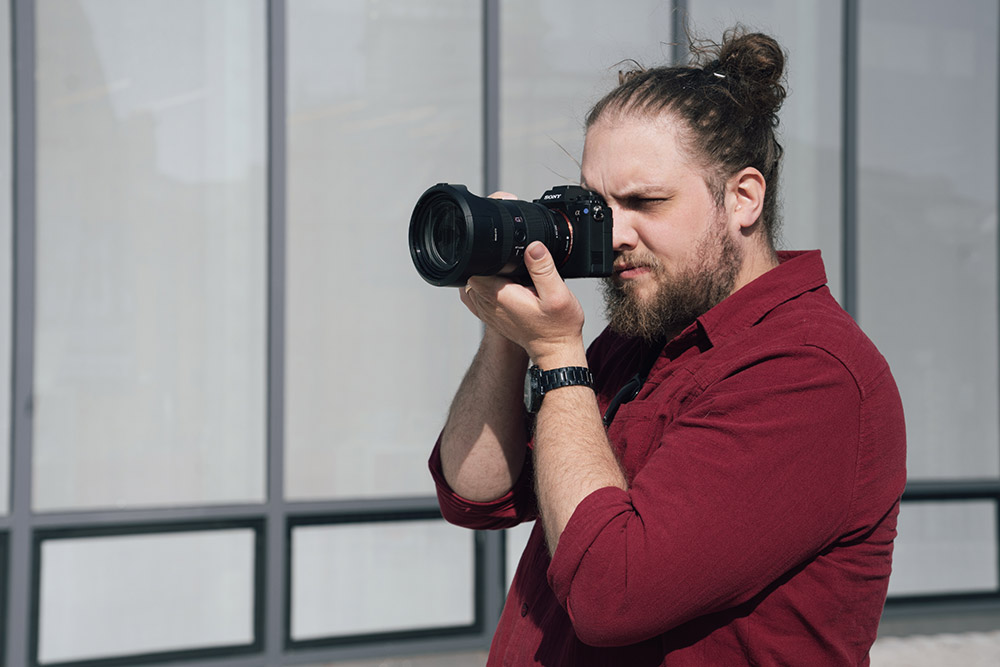 The first generation model was one of the earliest pro-level G Master lenses released by Sony back in 2016 and remains extremely popular. However a lot has changed since 2016, with Sony cameras at the cutting-edge of technology, which has lead to a rise in movie making now spanning 4K+ and even 8K recording (see the Sony a1 and A7S III). Sensors have also developed and are higher resolution with great dynamic range, with the a7R iv and a7R IVa capable of capturing over 60 megapixels. The burst rates which some cameras are capable of was unimaginable six years ago, but lenses developed at that time still need to perform with professional capabilities which cameras now offer.

It’s for this reason Sony updated the FE 24-70mm f/2.8 GM II Lens and they have added the very latest optical technology at their disposal to meet incredibly demanding situations. 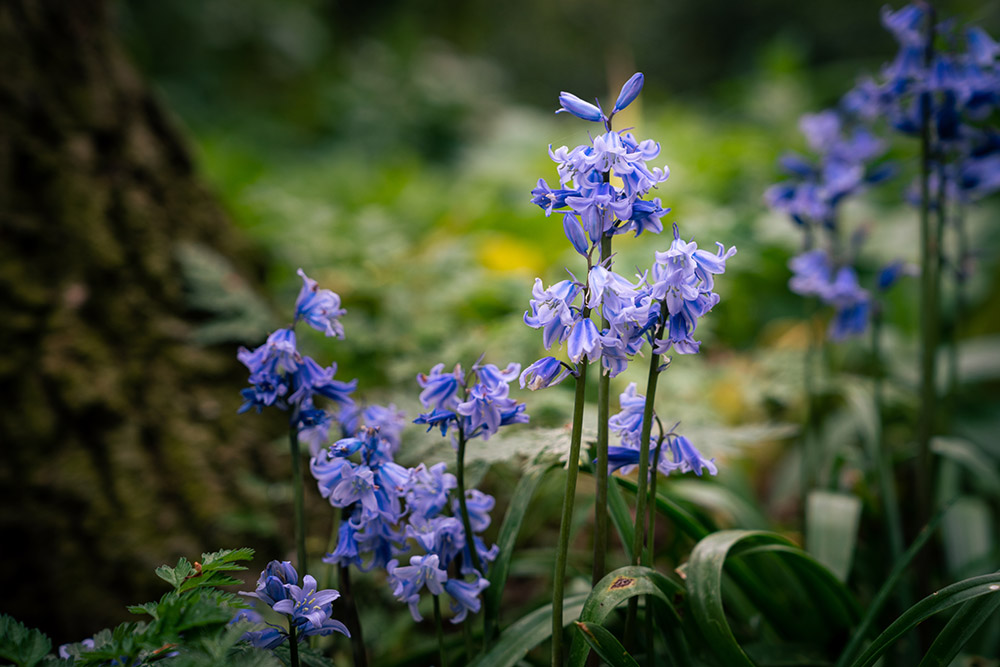 With a new era of Sony lenses developing we see the second model arrive which has been updated from the Holy Trinity (after the 70-200mm GM II). The 24-70mm f/2.8 GM II has been completely overhauled from the ground-up, with headline updates being something which Sony has taken away. Happily this is a reduction in size and weight. Who doesn’t want smaller and lighter lenses after all? This is in keeping with Sony’s ethos of creating the most compact mirrorless cameras and accompanying interchangeable E-mount lenses possible.

To this end the second generation 24-70mm is 191g lighter with around 18% less mass. Smaller and lighter lenses are easier to manage, transport and keep steady when handholding, particularly as the 24-70mm relies on in-body stabilisation without any optical stabilisation available. Despite these size and weight reductions the lens includes more optical elements, more special glass elements, more focus motors, more lens controls and even new lens coatings. 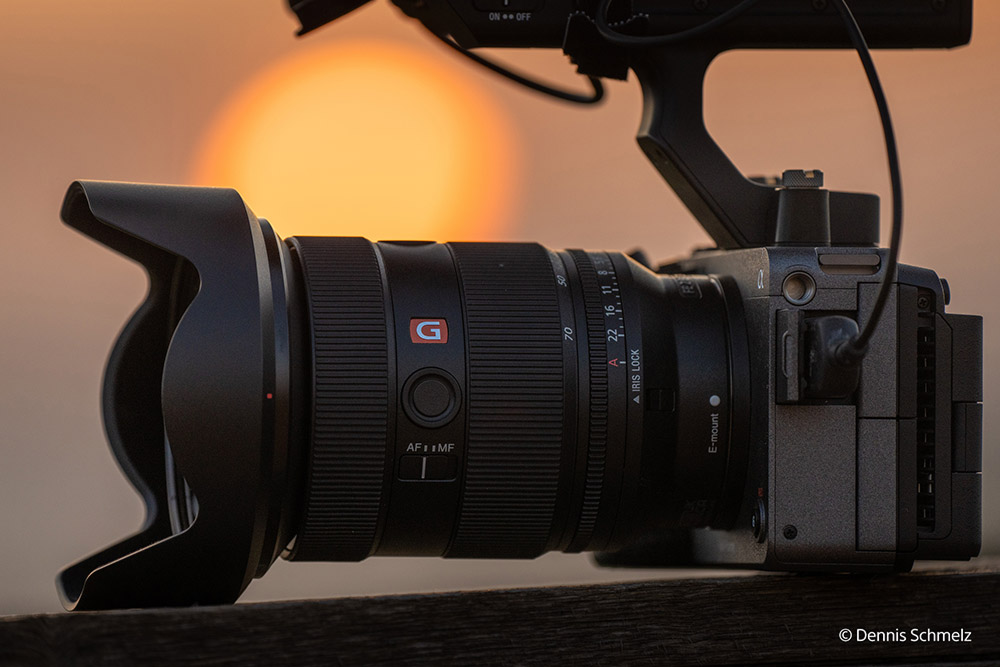 Prepare to be impressed as everything has been improved, including focus speed, tracking performance, focus while zooming and minimum focus distance. Image quality is also enhanced, with more special glass elements resolving higher detail throughout the zoom range and across the edges of the frame. Images show more resolution and clarity as a result of special elements as well as improved contrast from a reduction in internal reflections and the latest Nano AR Coating II (and Fluorine) coats.

A floating mechanism corrects aberrations and improves close up performance, working together with a new 11-blade rounded aperture and Extreme Aspherical glass elements. These reduce the effects of ‘onion rings’ with cleaner, rounded bokeh balls, resulting in beautiful effects when the lens is wide open. It’s better in every way possible, which also goes for video recording. 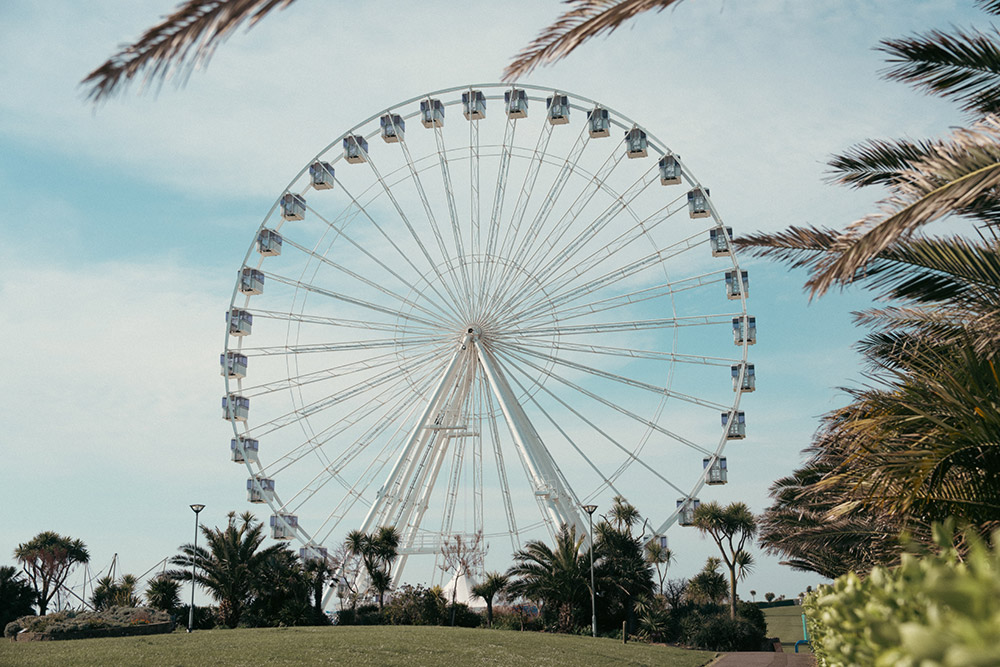 Many content creators are drawn to Sony camera systems for a number of reasons and having a high quality 24-70mm lens provides a tempting option in a variety of filming situations. To help sway moviemakers, Sony reduced the effects of focus breathing in the new lens. Some cameras like the a7 IV and certain pro Sony cinema cameras include a breathing correction feature, but this crops slightly into the frame, rather than eliminating the cause.

As well as reduced focus breathing, the new lens includes a de-clickable aperture switch, focus torque settings and linear response MF. Add in superbly capable and quiet focusing from the new XD linear motors and you have an extremely competent, versatile zoom lens for moviemaking. It’s also extremely compact and lightweight, ideal for anyone mounting their gear onto a gimbal while keeping weight down when you add monitors, microphones or other video accessories. 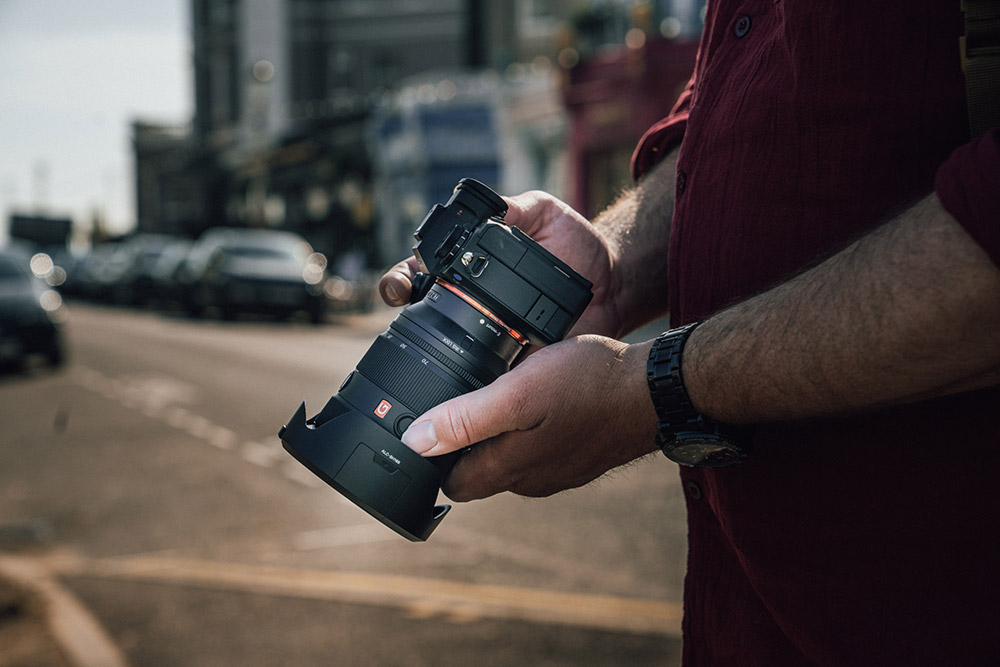 Gareth got his hands on the 24-70mm f/2.8 GM mark II Lens and shares his thoughts in this video review here.

For many users it’s essential that their lenses are able to keep up with the technology packed into newer camera bodies. Professionals are finding themselves in ever more competitive environments, perhaps required to capture videos as well as stills, shooting faster bursts and working in more challenging environments. There are also more videographers and hybrid shooters, harnessing highly capable mirrorless cameras rather than video-only tools. There are roughly 10x more Youtube channels today than in 2016 and any competitive edge is welcome. 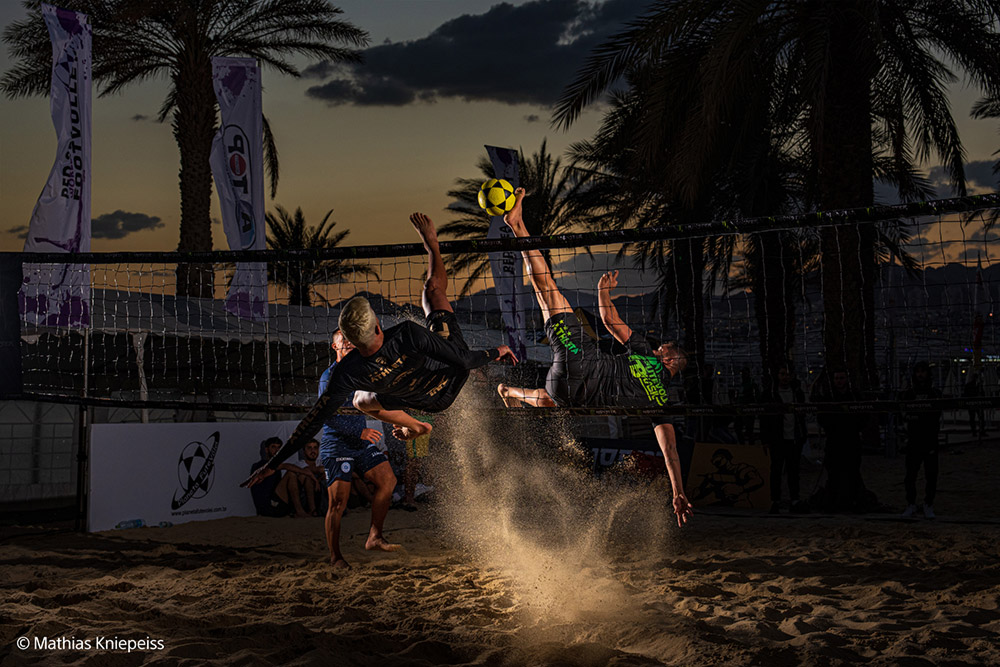 The redesigned FE 24-70mm f/2.8 GM II lens addresses just about every requirement mentioned, (aside from adding optical stabilisation). This makes it a contender for existing 24-70mm GM lens owners thinking about upgrading, as well as anyone adding a pro-level standard zoom to their repertoire. The updated lens has everything going for it, being smaller, lighter and faster while delivering even better image quality than before.

Check out the Sony FE 24-70mm f/2.8 GM II lens product page for more information and to reserve yours today and visit our camera and lens reviews page for more Sony gear reviews including: