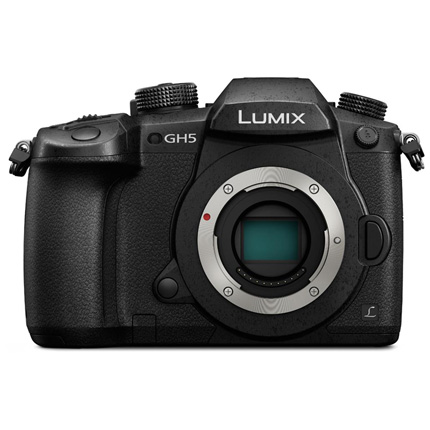 Get Complete Creative Control
Save 40% when buying Capture One Pro 21 Only £179 with this camera.

The Panasonic Lumix GH5 makes a number of improvements and adivancements over its predecessor, the Lumix GH4.

With a 20MP Digital Live MOS sensor boasting 25% more pixels than in the GH4, the new Venus Engine to process images, and no low-pass filter, the Lumix GH5 delivers unprecedented picture quality in the Lumix range of Panasonic cameras.

Across-the-board improvements come in Natural Texture Expression, Multi-Pixel Luminance Generation for clear, sharp images, Intelligent Detail Processing to analyse and detect the characteristics of every siangle pixel and supresses false colours at the image edges, Three Dimensional Colour Control to detect hue, saturation and brightness and applies optimum control according to the value of each factor.

Now with High Precision Multi Process Noise Reduction, photos can be clearly shot even at ISO up to 25,600.

This stabilisation compensates for larger movements which were conventionally uncontrollable and compensate to a maximum of 5 exposure stops, meaning you can use a shutter speed 5 stops slower than you normally would be able to get away with.

The high sensitivity of the Live MOS sensor and Venus Engine power deliver high-speed readout of full digital signals for an outstandingly high quality image from every frame. There's also no cropping of the image for 4K video, so you're getting the benefit of the full frame.

Choice of between MOV, map4, ACVHD Progressive and AVCHD formats at a variety of frame rates; there's also no recording time limit in either FHD or 4K video and professional users can set the system frequency to 59.94Hz (23.98Hz), 50.00Hz, or 24.00Hz.

Panasonic have also included, at the request of Pro users, a Waveform Monitor and Vector Scope.

The GH5 benefits from an improved Depth from Defocus (DFD) and Contrast AF Technology which calculates the distance to the subject by evaluating two images with different sharpness levels and comprehensively analyses the form, size and even motion of the subject.

With the new Venus Engine, the speed to measure distance is 6x faster, and the speed of sensor drive during auto focusing has been increased which means the GH5 delivers ultra-high-speed AUF of approximately 0.05 seconds, as well as 12fps in AF-S and 9fps in AF-C using mechanical shutter in full resolution.

The number of autofocus areas has also been increased to 225 (from 49 in the GH5) and this can now be customised so you can create a group of focus areas depending on the composition of your image, which can be controlled using the new joystick with your thumb on the back of the camera.

To ensure you always get the perfect image, Panasonic have introduced their Post Focus and Focus Stacking technology into the Lumix GH5.

Post Focus enables you to select a specific focus point in an image after it's actually been taken. This is particularly helpful for macro shooting.

Focus Stacking allows you to take multiple images of the same frame in different focal lengths and combine them into one, super-sharp image.

A first in any Panasonic camera is the introduction of 6K PHOTO. This feature enables you to shoot 30fps of 6K images (approximately 18MP images) and extract the best image from the burst file making sure you never miss that fast paced moment again.

Additionally, 4K PHOTO has been upgraded in the GH5 and lets you capture 60fps of still images at 4K to get a still image of around 8 megapixels.

The Panasonic Lumix GH5 has been built with professional users in mind. The main body is composed of magnesium alloy and has a full diecast front and rea frame.

Furthermore, every joint, dial and button has been not only splash and dust proofed, but also freeze proofed down to -10 degrees Celsius.

The Live View Finder in the GH5 has an outstanding magnification of 0.76x (35mm equivalent) and features a 3,680k-dot OLED display and 100% field of view.

The static-type touch screen is a 3.2 inch free-angle screen in the 3:2 aspect ratio with a 1,620k-dot resolution.

Further connectivity comes in the form of Low-Energy Bluetooth 4.2 and 5GHz Wi-Fi for flexible and easy image sharing.

Panasonic are planning a number of Firmware updates for 2017 that will add enhancements to an already outstanding camera.

Panasonic has announced the forthcoMing release of a major new firmware version for the Lumix DC-GH5 that adds a collection of new features to upgrade many of the camera's operations. The improvements apply to modes for both still and Video users, and centre around enhancing the quality of the camera's output and handling.

Now still life, Portrait and macro photographers will be able to check composition on the big screen and control camera functions remotely via a new tethered shooting mode. Using the new Lumix Tether software users can connect the GH5 to a PC via USB and record stills, Video and 4K/6K Photo sequences.

The software allows control of all the man features of the camera, including exposure, focus, white balance, flash controls and file formats - to name just a few. With the camera connected to the computer we can preview our images, make adjustments and inspect the results from a distance. The images can be saved to the camera's memory card or downloaded directly to the computer as they are recorded.

Improvements to the focusing system

The GH5's AF system is improved in performance and handling for both still and Video shooters. An important change comes in the camera's ability to work in low contrast areas, as this helps in both still and Video work. Autofocus tracking is also improved in Video modes, and when Using the AF tracking feature we can now place the tracking box on the screen before the subject has arrived. Also now the AF point can be moved during Burst mode f the subject is travelling across the frame.

f you want to keep an eye on what is being focused on there is now an option to keep the AF Display on when multi-area modes (auto or custom) are in use.

Better processing has reduced the time we have to wait between one 4K/6K Photo burst and the next, and now the AF point can be shifted while a 4K/6K Photo sequence is being recorded. 6K Photo can also now be used in loop recording mode.

The new firmware adds 411Mbps data rates and 4:1:1-bit colour as well as compression to the camera's 4K and Cinema 4K Video formats. this improves the range of tones and colours that can be recorded, while the compression works on each individual frame rather than on groups of several frames at a time. Compression also reduces the file Size of your Video so we can ft more into the same space on the memory card. Those who shoot in Full HD will benefit from an additional 11Mbps mode, also with the enhanced colour and compression characteristics.

The Lumix DC-GH5 according to Panasonic, the first Digital camera that's capable of shooting 'HLG' 4K HDR Video. HDR stands for High Dynamic Range, and means that the camera can produce a wider range of brightnesses in its Video to create footage with detailed Highlights as well as shadow areas. this mode is Designed to work with the new wave of 4K HDR televisions and computer monitors, and will allow users to continue to create technologically advanced content well into the future.

Anamorphic shooting is assisted by a new de-squeeze Display mode that compensates for the squeezing effect of the lens to show what the letterbox-shaped footage will look like after stretching in post-processing. Guide line options allow users to preview the area that will be used as well, with Guides selectable for :, 6:9, .5: and .9: formats. A new in-body stabilisation mode is available that's Designed for use with Anamorphic lenses and adapters, and users have a choice of .x and x settings to match the characteristics of the lens in use.

Bluetooth plays a much bigger role in the Wireless communications between the DC-GH5 and your smartphone with version .1 firmware. previously Bluetooth could be used to connect the camera and phone, while WF took over for the hard work. with the new firmware the camera can be controlled via Bluetooth, so users can access the shutter release remotely. Bluetooth also allows for a shutter lock to be activated for Bulb exposures or burst sequences, and Video recording can be started/stopped in the same way.

* [.S. Lock(Video)] is added. this powerfully compensates for handshake when the viewing angle is fixed.

* When the K (Kelvin) value was changed after adjusting the colour temperature with white balance Compensation, the setting was reset. this bug has been fixed.

* The time to shooting and the number of recordable pictures are Displayed on the stand-by screen.

improved usability of Power save LVF

* Power save LVF can now be used in all stand-by Display options.

The Lumix GH5 is the second movement in Panasonic's high-end, flagship Micro Four Thirds symphony, following on from the highly acclaimed and much-loved Lumix GH4.

With a host of exciting and essential new features, the Panasonic Lumix GH5 firmly cements itself as a camera for professionals; whether you're a professional videographer or photographer. With 6K Photo recording 18 megapixel 6K images at 30fps, 4K video at 60p/50p and recording in broadcast standard 4:2:2 10-bit, a new 20MP imaging sensor, and in-body 5-axis image stabilisation (or Dual I.S. with O.I.S lenses), amongst other new features, Panasonic have created a professional quality camera that will easily fill and out-grow its predecessor's boots.