With the release of the ZV-1F we now have a choice of three Sony cameras for vlogging, selfies and all sorts of content creation. Many users have declared the Sony ZV-1 as the best compact vlogging camera you can buy and want to know how it compares to the newer compact all-in-one model. You may be considering switching from smartphone content to camera creation, in which case our review answers everything you need to know. 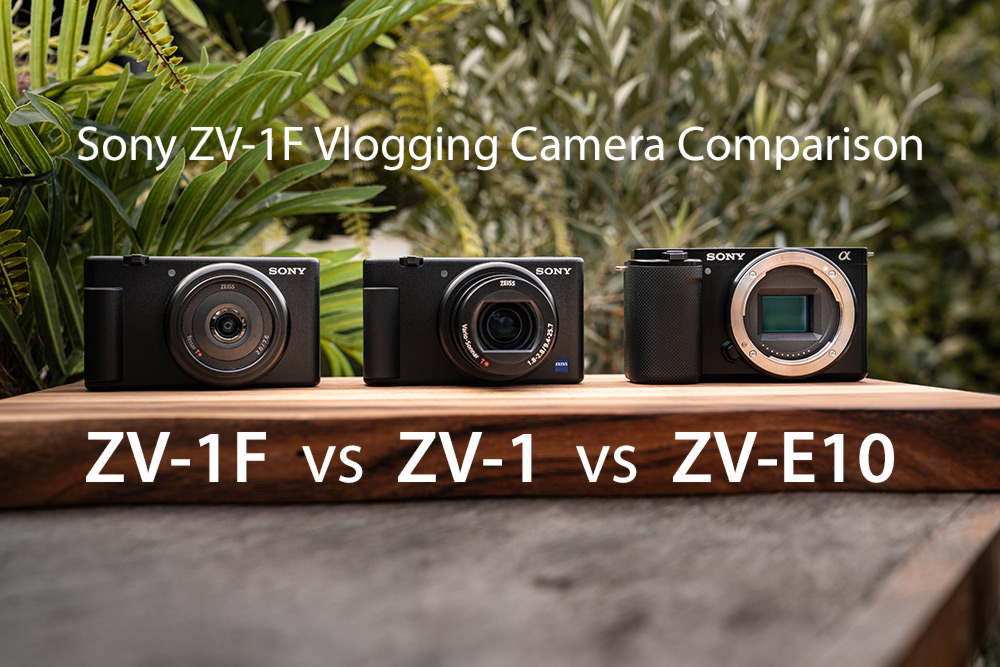 To help you decide which is best for your type of content creation our Sony ZV-1F vlogging camera comparison includes specifications and a closer look at the key features of the new ZV-1F vs Sony ZV-1 vs ZV-E10. You can also watch the ZV-1F video review from Gareth, which explores everything you need to know about this latest compact camera from Sony.

When was the Sony ZV-1F released?

Following on just a year after the August 2021 launch of the ZV-E10, the Sony ZV-1F was released on the 13 October 2022. Prior to that, the class-leading ZV-1 came out on May 26, 2020, which means there are just two years separating these vlogging cameras.

The Sony ZV-1F costs £549, which makes it the most competitively priced of the three dedicated vlogging cameras from Sony. This price also compares well to the RX100 series of compact cameras, which offer advanced video and AF capabilities in a compact point-and-shoot. 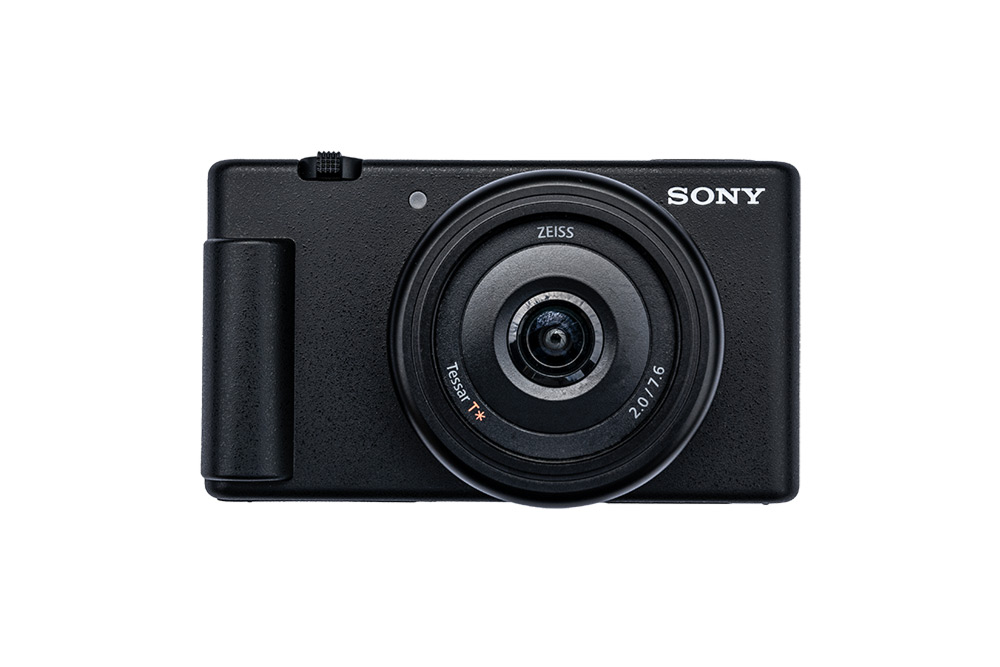 What are the Sony ZV-1F key features?

There are several features which set the Sony ZV-1F apart from other models in the range and many similarities, some of which are surprising at its price point. The 1-inch at the heart of the camera plays a part in great image quality, good low light performance and 4K video.

The 20mm (equivalent) ultra wide angle prime lens is a great lens for this camera, capturing a wider field of view that the 24mm found in the ZV-1. This means you can fit more into the frame when vlogging, shooting movies and taking photos or timelapse.

Sound quality is also great thanks to a 3-capsule microphone, which produces high sound quality. The mics are forward facing directional, which means you’ll be heard even when recording in slightly noisier environments and a dead cat or wind jammer reduces wind noise when you’re shooting outdoors. There’s also an audio jack and non electronic accessory shoes to mount accessories such as an LED light for your video productions. 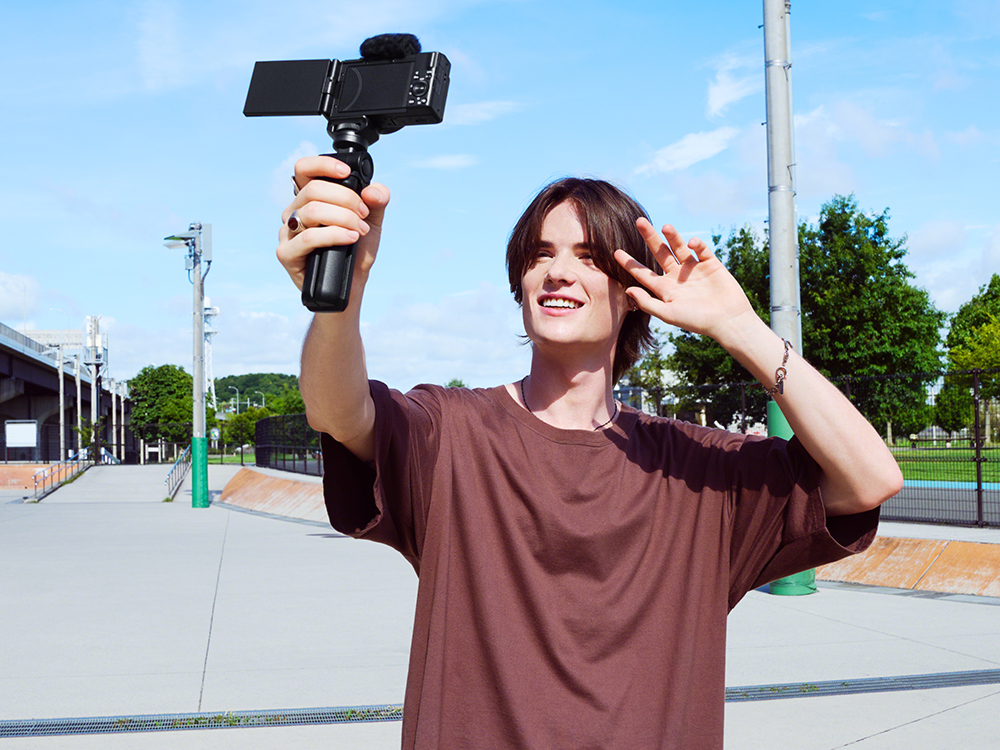 If you’re a product reviewer or use props in your videos, Sony’s Product Showcase feature can be selected, which switches focus quickly between the talent and a product or object, which is held up in the frame. This makes for effortless focus switching, where other cameras might hunt around, or need you to avert your face when holding up a product in order to switch focus lock.

Sony has also included 10 creative looks with the camera, which help you to capture a creative result straight from the camera, without needing to adjust any other settings. These work well for stills, video and live-streaming, so you have plenty of choices for how your movies and streams will appear.

The compact camera shoots JPGs up to 16fps for 120 frames, which is ample to capture the majority of action sequences. 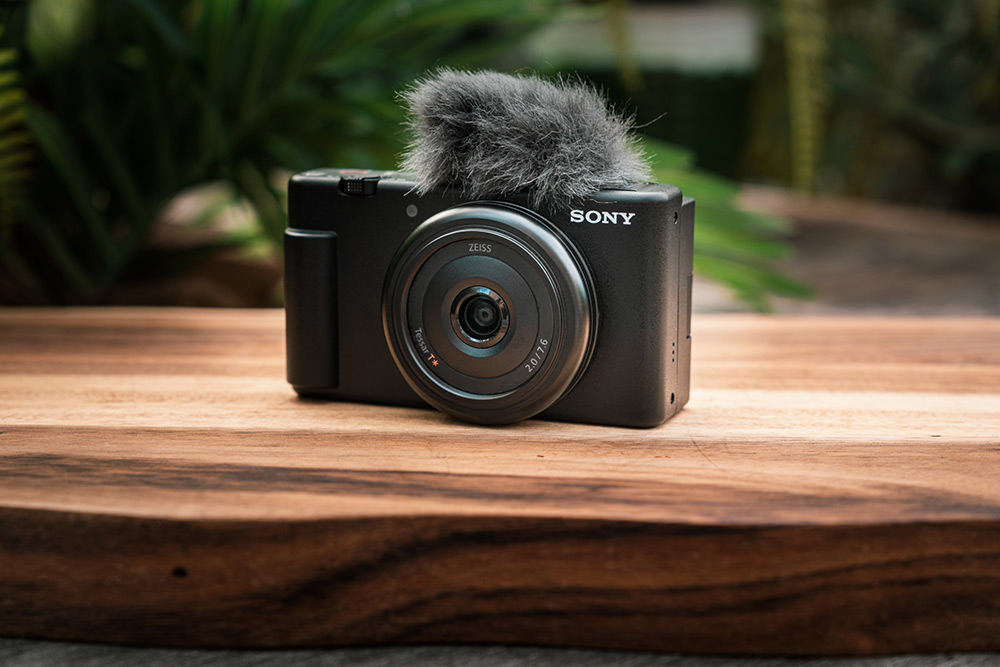 You can record 4K movies using S-Log with the ZV-1F which gives a wider dynamic range, as well as special effects including 5x slow motion and 60x hyperlapse. This provides plenty of latitude for creating engaging content, which is social media ready and easy to post without processing.

Web meetings and live streams are also easy to set up, using either a PC connection over USB-C, or with a Sony Xperia phone connection. This enables you to livestream content over WiFi and remotely on location with your Sony phone. 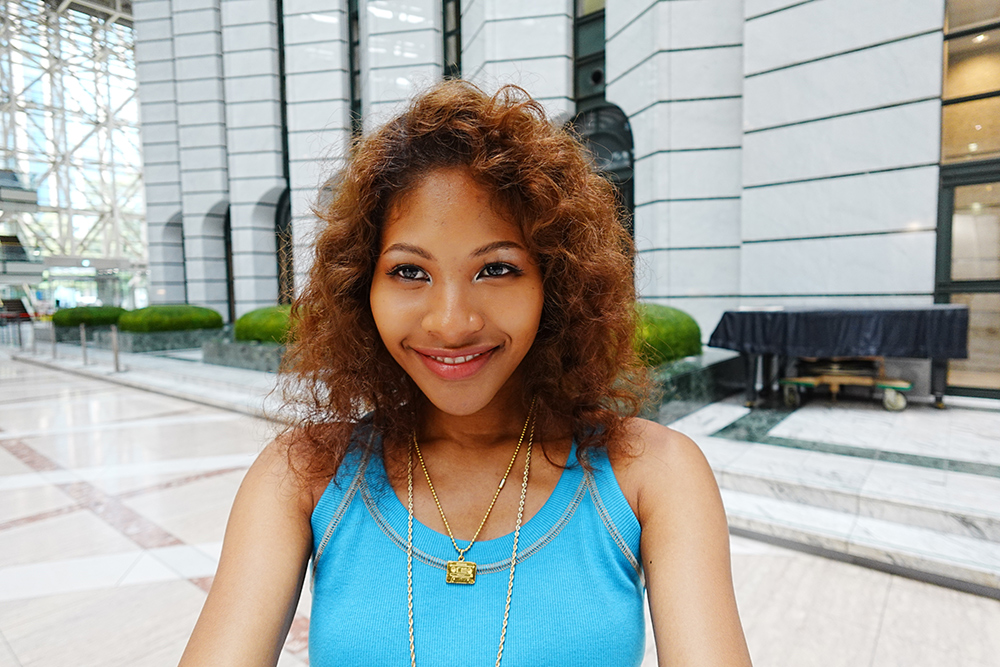 The table below highlights key specs from these three Sony vlogging cameras, and demonstrates just how proficient the newer model is, despite being the most affordable in the line-up.

The ZV-1F is Sony’s entry-level vlogging camera, primarily for newcomers who are upgrading from a smartphone or just getting into content creation. If you want to make family movies, video escapades with your posse or love travel and want an ultra compact affordable camera, this is the one. 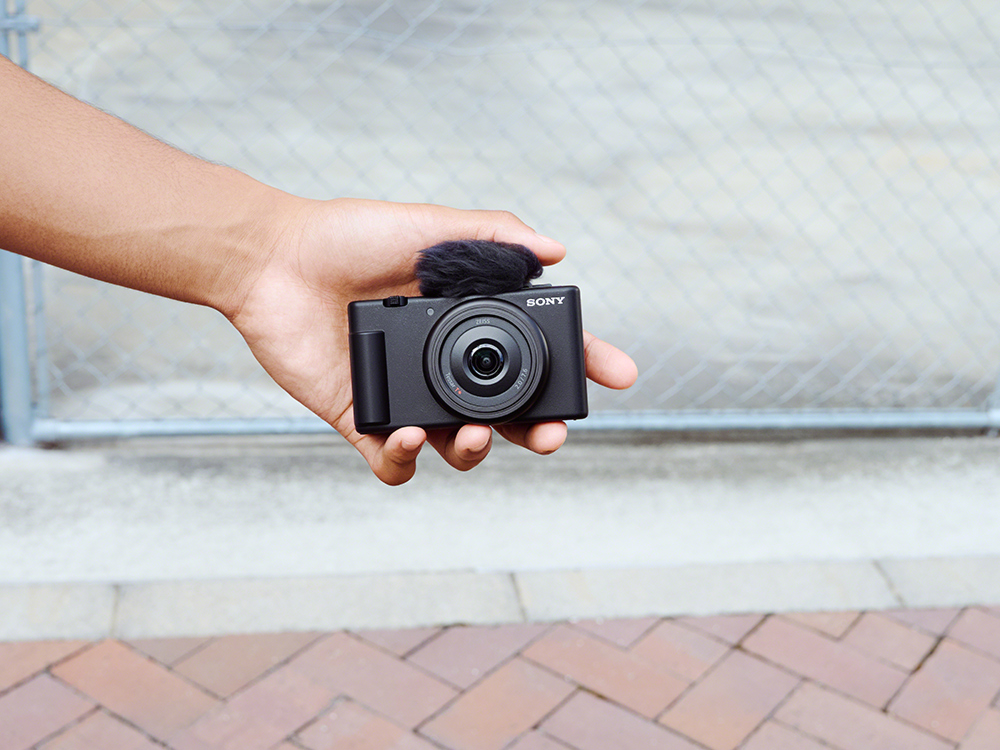 The 20mm prime lens is ideal for ultra-wide scenes and vlogging with a larger background. Battery life is also strong and you can bring spare batteries for when you run out and the compact is extremely lightweight at just 255g, so you can bring it anywhere.

Contrast detect AF works admirably in daylights conditions, but the Sony realtime AF with phase-detect and tracking in the ZV-E10 is more tenacious when recognising and tracking faster moving subjects. 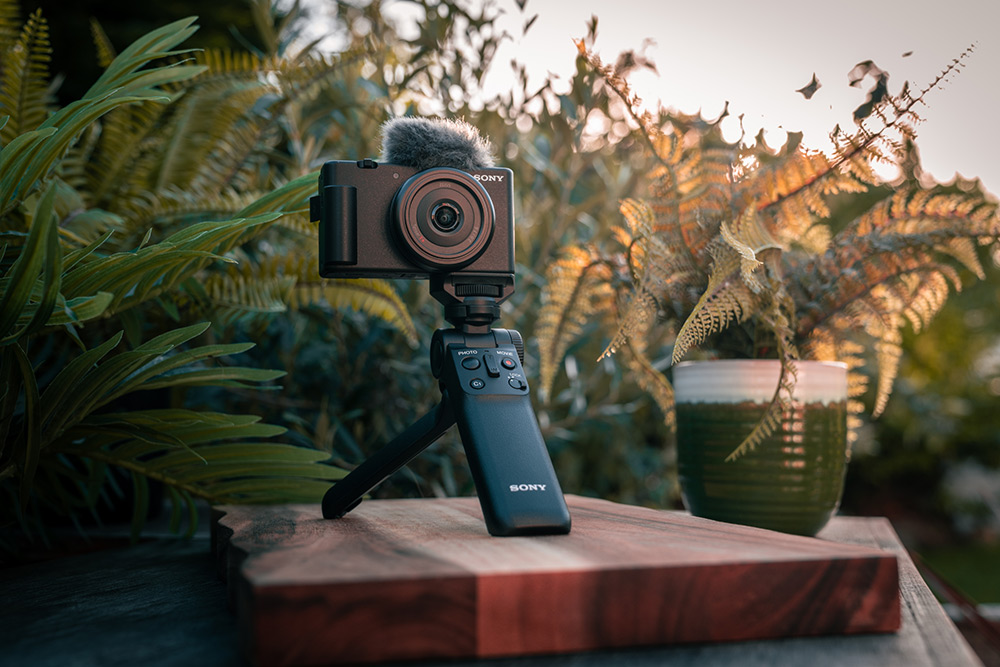 Watch Gareth’s hands on video review and comparison with the other cameras right here.

You get plenty of features for vlogging in the newest Sony compact vlogging camera, which costs about the same as a modestly priced smartphone, but delivers far better image and sound quality. It’s incredibly compact and lightweight too, so you can bring it on every adventure without carrying lots of weight. Although the internal mics are great, you can also add an external camera mic for even better audio quality when you want.

Controlling the camera is easy via Bluetooth using your smartphone and a dedicated App, with lots of content options, live streaming and slow motion video effects. The 4K video quality is fantastic from the 1-inch sensor, superior in just about every way to any smartphone videos.

Each of these three cameras offers something unique for content creation and vlogging.

If you don’t want the hassle of changing lenses and need a straightforward, highly capable compact vlogging camera, reserve your Sony ZV-1F today and start creating epic vlogs for your audience.

Although it is not as wide, the versatility of a 24-70mm (equivalent) zoom lens, Fast Hybrid AF and compact 294g nature of the ZV-1 will appeal to a lot of creators. It has already proven itself, but you miss out on 5x slow motion and 60x hyperlapse if these would add to your story.

On the other hand you like the idea of shooting in RAW to edit your photos and want the ability to change focal widths, the ZV-E10 delivers that along with superior AF and a larger sensor.

Whichever you choose, all three cameras offer advanced and easy-to-use features, which ensure your content will capture the imagination of your audience and impress family and friends.