Today, 8th March 2017, is International Women’s Day – a day that celebrates women around the world and highlights gender parity. Amongst the many struggles for gender equality, there are female photographers who, either through the subversive nature of their images, through their ground-breaking content, new approach, or hitting the socio-economic, cultural, or political zeitgeist of the era, have created influential bodies of work that stand the test of time.

We’re looking at the work and stories of a few of these influential photographers with the hopes they’ll inspire a new generation of girls and women to explore the world through a lens. 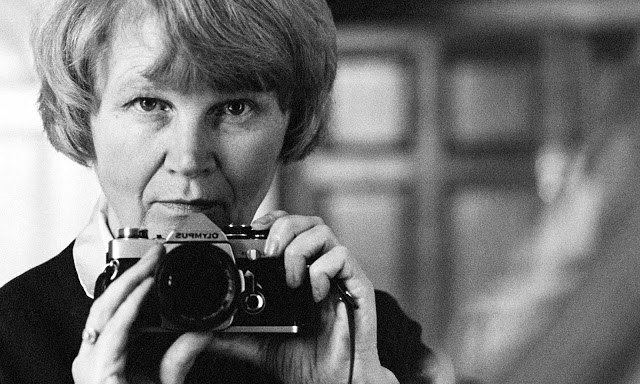 Jane Bown is arguably one of the most accomplished and most highly regarded portrait photographers of the 20th century. 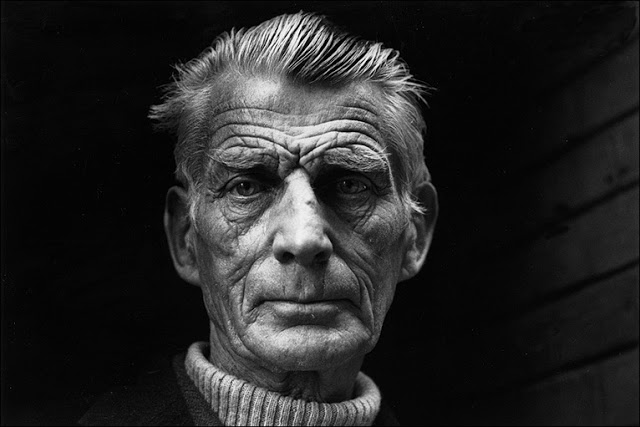 Working with a Rolleiflex and latterly a 35mm Pentax SLR and shooting primarily in black and white, Bown’s portraits are enigmatic; Lord Snowdon described her as “a kind of English Cartier-Bresson” who didn’t rely on tricks or gimmicks, just simple honest recording, but with a shrewd and intellectual eye.

In 2014, shortly before her death, a documentary entitled Looking For Light was made about her life and work, featuring conversations with a usually public-eye shy Bown, and a number of her subjects.

Working with a Rolleiflex and latterly a 35mm Pentax SLR and shooting primarily in black and white, Bown’s portraits are enigmatic; Lord Snowdon described her as “a kind of English Cartier-Bresson” who didn’t rely on tricks or gimmicks, just simple honest recording, but with a shrewd and intellectual eye.

In 2014, shortly before her death, a documentary entitled Looking For Light was made about her life and work, featuring conversations with a usually public-eye shy Bown, and a number of her subjects.

Hilla Becher and her husband, Bernd are considered revolutionary in the world of photography, having been credited by some with inventing the typology, bridging the realm between conceptual art and photography.

Their typological studies of industrial architecture turned mundane, functional buildings into art, and in doing so allowed the viewer to see the beauty and genius of the architecture, laid bare in series’ of photos that starkly showed the buildings’ differences. 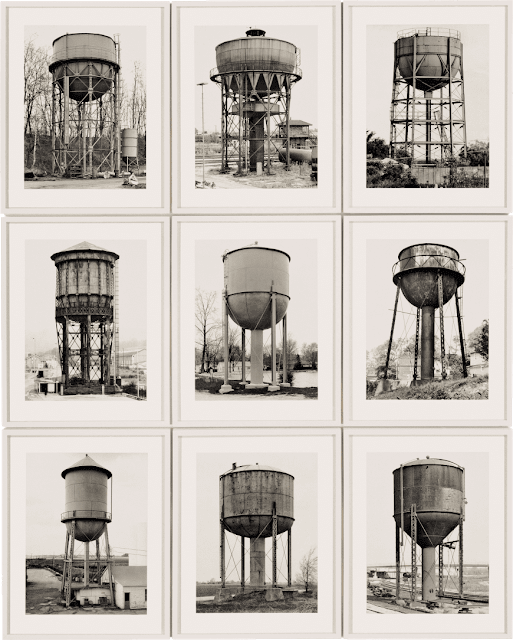 Their subject matter included cooling towers, gas towers, blast furnaces, and winding towers, amongst others, all of which were shot with their 10x8 inch plate camera . The transcending appearance of their art was down to their meticulous approach to their photography – always photographing on overcast, grey days in order to discard any semblance of shadow, and always from the same confrontational viewpoint – occasionally even going so far as to build scaffolding towers in order to gain the appropriate vantage point.

Working as a collaborative duo with Bernd, Becher had countless solo exhibitions and commissions through her lifetime, and together they founded the ‘Becher School’ or’ Dusseldorf School’, passing on their knowledge to future generations. Amongst the future generations educated by Becher is the acclaimed art photographer and creator of 8 of the top 25 most expensive photographs ever sold, Andreas Gursky. 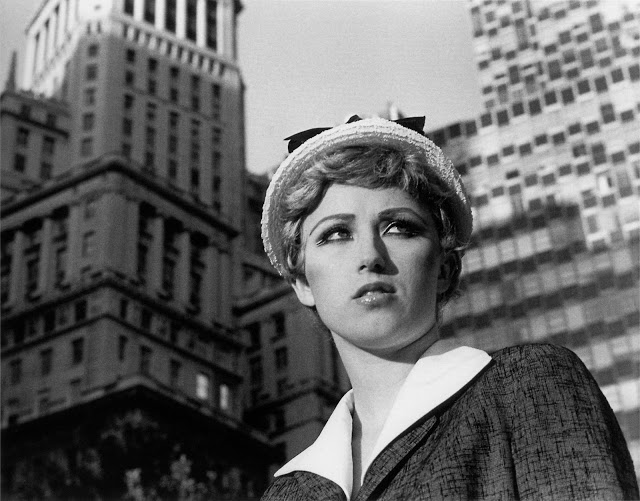 Cindy Sherman is described as “one of the first artists, let along photographers, to explore the idea of the malleability or fluidity of identity”, according to Eva Respini, photography curator at the Museum of Modern Art in New York where, in 2012, a 175-image strong retrospective of Sherman’s work was held.

Sherman was the “trendsetter in terms of distorted characters within self-portraiture”, says Jillian Mayer, who creates work inspired by Sherman’s own. 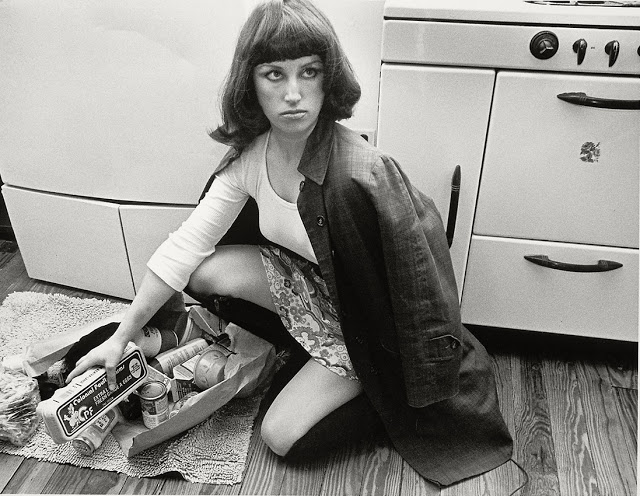 Sherman created her seminal game-changing body of work, the black and white series “Untitled Film Stills” in the late 1970’s. Like most of her subsequent work, this was a series of cinema-inspired performances featuring herself as the subject matter, blurring the lines of self-identity and representation.

With a steady hand over the zeitgeist, Sherman used photoshop, make-up, hair styling, fashion, and other elements to create studio-based portraits with her self as model, questioning her own identity and the nature of representation of herself and women.

Sherman’s work has in some cases been the precursor to seismic cultural shifts; she has been credited with inspiring a generation of young women to explore their own identity, gender, and fluid nature in today’s image-saturated culture.

Jane Hilton is a documentary and portrait photographer whose work centres on her love of America and American culture.

Ever since her first adventure to Arizona in 1988, Hilton has been chronicling the American Dream through her large format documentary portraits of Cowboys and Prostitutes, exploring the many contradictions in the American way of life. 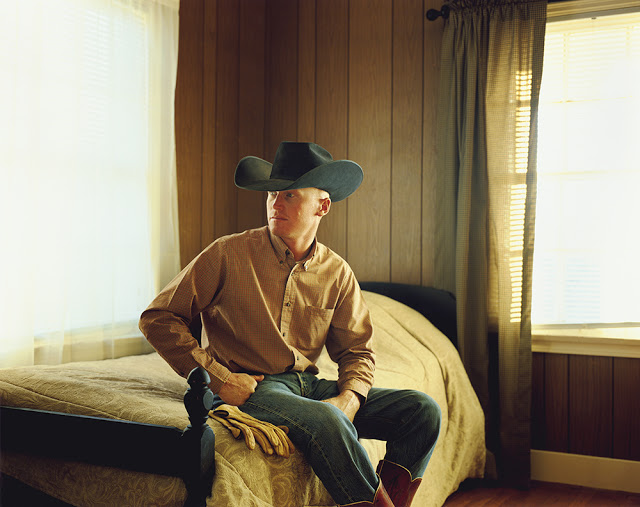 Hilton received substantial recognition when the BBC commissioned her for a 10-part documentary series called Love for Sale, following the working girls in two brothels in Nevada.

Through her films and photographic works, Hilton challenges prejudices about prostitution, showing the women behind the job, telling their stories.

Hilton’s photographs are a study of contemporary American; technically brilliant and engaging portraits alongside compelling documentary images that have established her as a fundamental visual storyteller. 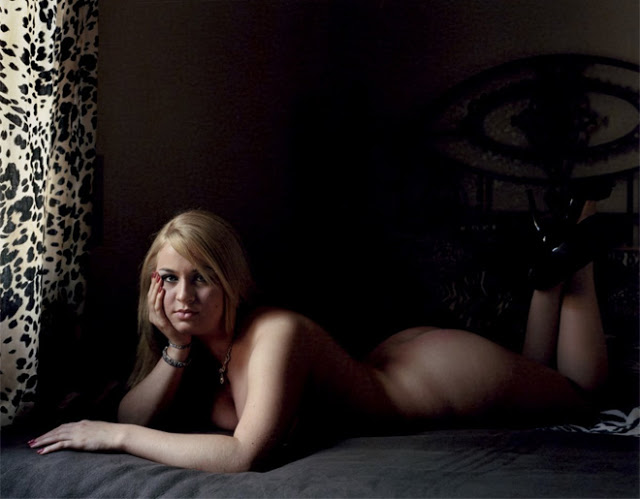 I spoke to Jane recently about being a photographer, being a woman, and her career.

On photographing in brothels in America, Jane says it was easier for her to get through to the girls being another girl, and had she been a man she would never have been allowed to do some of the things she was able to do – for example, they allowed her to stay in the brothel while working on the project.

Tragically, Francesca Woodman committed suicide at the age of only 22 in 1981, but she left behind a substantial body of work that continues to receive much critical acclaim and discussion, influencing generations of young women to explore similar subject matter to those displayed in Woodman’s images.

Woodman’s photography, mainly black-and-white images of herself and other women, explores themes of gender and self and the relationship of the body to its surroundings. 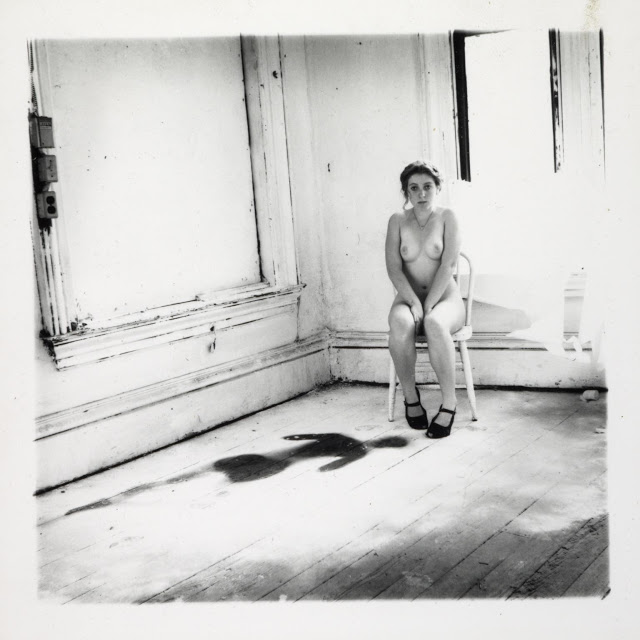 Her evocative images combine play, self-exposure, and performance, entwining her body within her surroundings, showing an underlying vulnerability in these unconventional self-portraits.

In the words of Anthony d’Offay from Artist Rooms, Woodman’s poignant photographs portray shocking, tragic, personal, and poetic truths that have inspired young women who want to take up photography and be artists; they allow viewers to confront elements of yourself to understand the work – work that owes nothing to anyone else.

Laura Pannack is a social documentary photographer whose work has been extensively exhibited and awarded; most recently winning the Prix HSBC pour la Photographie by HSBC France in 2017.

At it’s heart, Pannack’s photography aims to look beyond the superficiality of appearance and discover something beyond the gaze – something that tells a narrative about the person, seeking to explore the complex relationship between subject and photographer. 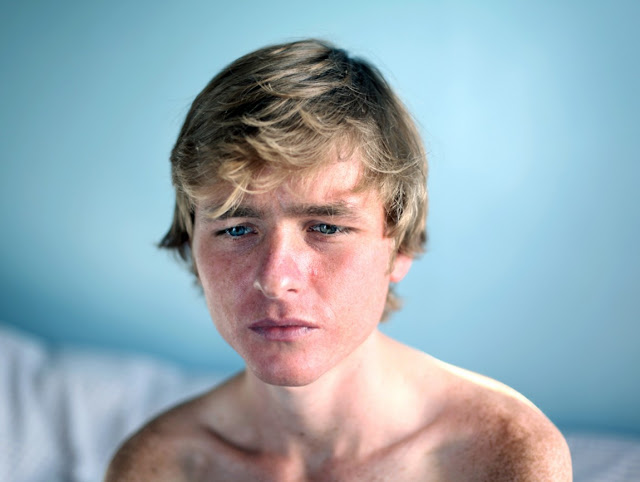 Pannack’s early work discusses themes of youth, love, age, gender and relationships, with her later personal work focusing on human connections, exploring her interest in psychology and photography, trying to understand the lives of the people she captures and to present them creatively.

I recently caught up with Laura to discuss her views about the representation of women in photography.

Laura said she often gets asked ‘what’s it like being a female photographer?’ which she says creates a gender divide that didn’t exist in the first place. She said she feels that in some ways women are lucky as there are a number of women-only grants and awards available, and that she would have had to approach a lot of her work quite differently if she had been a man – so would much rather be a woman. 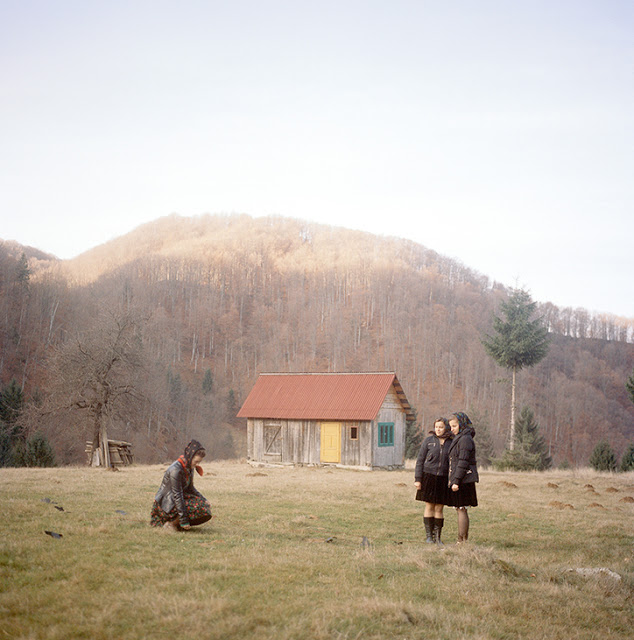 Laura told me that she really hopes that whenever she gains a commission, wins an award or anytime somebody responds to her work it’s because of her work and not because she’s a woman.

There was a prestigious award recently, Laura says, where the organisers were boasting that they ‘make sure there’s always a female winner’ – when the woman who won the award stood up and said she hoped she didn’t win just because she’s a woman – she hoped she won because her work was good.

On inspiring the next generation, Laura said she hopes there continues to be a very supportive community amongst peers, “I think I’m very blessed to have such a warm community embracing each others talents – some of my close friends are my favourite photographers in the world – some of them are my biggest inspirations – they blow my mind.”

Annie Leibovitz is one of America’s most profiled and celebrated portrait and fashion photographers, noted for her photos of a pregnant Demi Moore, her image of John Lennon and Yoko Ono taken on the day he died, and her work with Vanity Fair magazine, and Rolling Stones magazine since 1970. 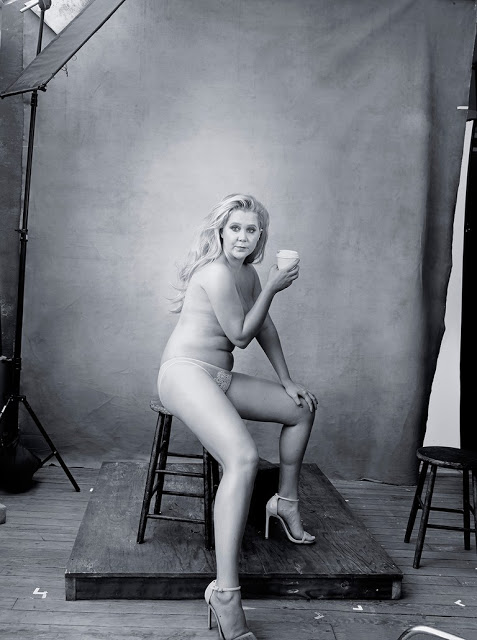 Leibovitz is the first woman to have held an exhibition in the National Portrait Gallery in London in 1991.

She is also the first woman in over 25 years to have photographed the Pirelli Calendar solo, which she did in 2015 with celebrated photographs of renowned women in fields including comedy, art, sports, and philanthropy, featuring women including Amy Schumer and Serena Williams.

Throughout her extensive career, Leibovitz as established herself as a premiere fashion and portrait photographer, having shot numerous iconic covers for magazines including Vanity Fair.

Vivian Maier stands out in this article, as she was not primarily a photographer. Maier worked as a Nanny for families in New York and Chicago, pursuing street photography as a past time and labour of love only. 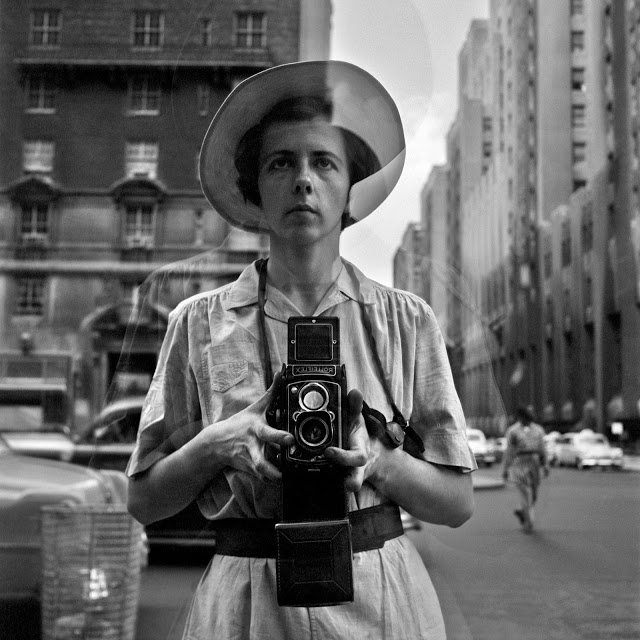 After her death, collectors bought storage lockers of Maier’s containing thousands of undeveloped rolls of film and since then, her story and images have spread around the world and received international recognition and favourable critique.

Maier’s work is posthumously considered some of the most influential street photography, depicting unusual characters and people on the fringes. With a subtlety to her image making, she was able to remain inconspicuous, allowing her to shoot remarkable photographs with a distinct narrative.