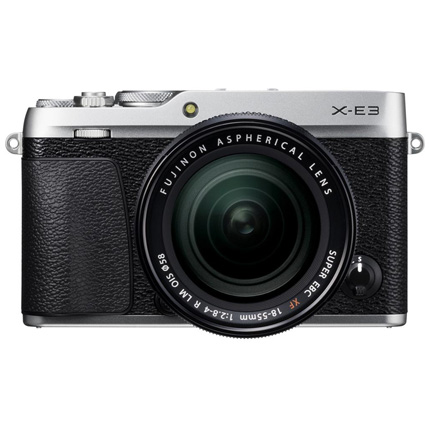 With premium X-Series build quality the Fujifilm X-E3 in silver with the XF 18-55mm lens provide a lightweight versatile mirrorless camera kit, which is ideal for travel, boasts 4K video and much more.

Fujifilm savings on every purchase of this item.

The Fujifilm X-E3 is a compact, portable, and effortlessly stylish mirrorless camera in the X-Series range that delivers 4K video recording, Bluetooth connectivity and exceptional image quality from the 24.3 megapixel X-Trans CMOS III APS-C sized sensor and X-Processor Pro image processing engine, which when paired with the versatile focal length of the XF 18-55mm f/2.8-4 R LM OIS lens offers a compact and lightweight mirrorless camera kit that's ideal for everything from daily photography to travel or street photography.

The first X-series camera to feature Bluetooth low energy wireless communication, the Fujifilm X-E3 allows photographers to pair their smartphone or tablet with the camera for easy and seamless transfer of pictures and video using minimal power.

On the back of the camera, the LCD monitor uses a static touchscreen offering Touch Shot, Touch AF and Focus Area Selection functionality, and introduces Touch Function which brings smartphone-like gesture controls such as pinch zoom and flick to the X-E3; this works especially well with the camera's updated AF algorithm which enhances the performance for tracking a moving subject.

Externally, the X-E3 boasts the premium exterior design that their X-series cameras are renowned for, which when combined with the adaptable functionality offered by the cameras' internals, and the timeless good looks, result in a small, stylish & powerful mirrorless camera that's a delight to both own and shoot with.

Nearly five years on from the release of the X-E2, Fujifilm have redesigned the original to give the lightest and most compact interchangeable lens camera with a viewfinder in their X-series line-up.

With lightness on its side, the X-E3 is an ideal travel buddy and a grip-shaped design and well-balanced design make the whole form remarkably comfortable to hold. The X-E3 now features the Focus Lever, first introduced on the X-Pro2, which allows you to instantaneously change the focus area while keeping an eye on the viewfinder.

A redesigned plate atop the camera features two dedicated dials one for shutter speed and one for exposure compensation. The dials are milled from aluminium and have a high-quality appearance and reassuring click into each setting.

The large phase detection AF area in the X-E3 has an updated algorithm to deliver a fast AF speed of only 0.06 seconds. An upgrade on the X-E2, the X-E3 tracks moving subjects twice as fast as its predecessor, as well as being able to track subjects that are a half the size.

Continuous shooing in the X-E3 is possible at up to 5 frames per second in live-view mode, it has a fast start-up time of just 0.4 seconds, shutter time lag of only 0.050 seconds, and a shooting interval of only 0.25 seconds.

With the ability to record Ultra-High Definition 4K video at up to 30p and Full 1080p HD video at up o 60, the X-E3 allows users to use the reputable Film Simulation modes for cinematic looks. You can output recorded video to an external monitor via the HDMI port and input auto from an external microphone.

The X-E3 is Fujifilm's first X-series camera to offer Bluetooth connectivity. Simply pair the camera with your smartphone or tablet and you'll be able to easily transfer images and video that you've taken to your device via the Fujifilm Camera Remote app.

The 3.0 inch 1040k-dot static LCD touch screen on the back of the camera enables several intuitive operations by turning on Touch Panel Settings. These include, in shooting modes, Focus Area Selection that allows you to move the focus point by tapping the monitor, and Touch Shot which lets you tap to focus and take the shot in one go.

In Playback Modes, the LCD touchscreen offers smartphone-like gesture control with Swipe Movement, Double-Tap Enlargement, Drag with a finger, and Pinch Out and Pinch In zoom.

When it comes to compact and portable lightweight mirrorless cameras, there are very few that can do everything the Fujifilm X-E3 is one of those. With a best-in-class combination of sensor and processor, the X-E3 delivers stunning image quality and will shoot UHD 4K video on top of that.

This camera is built as a perfect travel companion it's lightweight (as are the X-mount lenses that go with it), it has seamless always-on Bluetooth Low Energy connectivity for simple sharing of your images to friends and family back home or to social networks, it'sbeautiful classic rangefinder styling allow it to blend in anywhere, and it's functionally an easy-to-use camera with touchscreen gesture controls that are reminiscent of your smartphone or tablet.