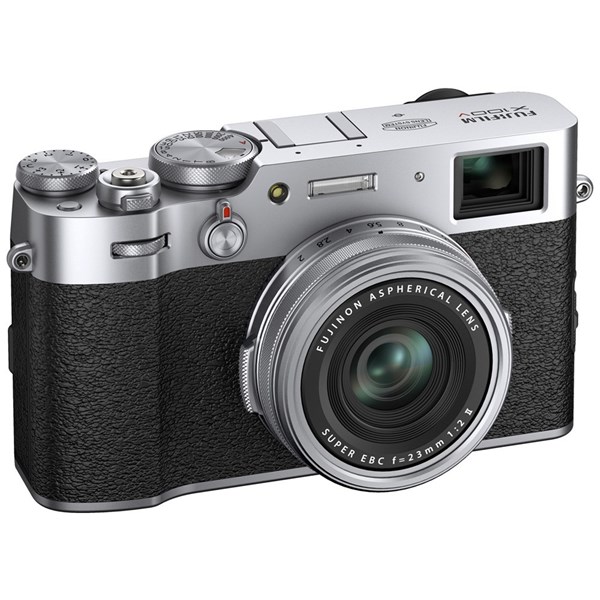 Wrapped around a 26.1MP CMOS 4 sensor, the silver version of the Fujifilm X100V comes with 4K video at 30p with no crop, advanced video features, making for a fantastic compact solution.

Video facilities have been bolstered with this new camera, now with 4K 30p, at 4:2:2 10bit via HDMI or 4:2:0 8-bit internal, with a seamless workflow, which incorporates built-in film formats such as the Eterna Cinema Film Simulation.

The fixed lens has also been upgraded to a 23mm f/2 (Mark II), providing a 35mm equivalent focal length. This provides an excellent solution for an all round lens, ideal for anythang from landscapes to portraits. The lens is sharper this time around, with enhanced optics featuring 8 elements in 6 groups, including 2 aspherical elements helping to reduce the effects of flaring, ghosting and aberrations.

The Fujifilm X100V brings many upgrades, along with new features such as weather resistance and the two-way tilting LCD screen. A compact and lightweight design, which can be applied to many shooting scenarios.

The hybrid viewfinder is more accurate than ever with 3.69 million dots, being an excellent solution for Street photography. There's also the option of using the 0.52x magnification optical viewfinder (OVF) with a flick of a switch. A 1.62 million dots, 3 inch rear touchscreen is now available and brings added functionality to the camera. Touch AF focus, access to menu settings and a highly useful tilting mechanism for extreme angle shooting.

Classic styling, with modern digital features are the standout points with the Fujifilm X100V. The solid aluminium construction weighs in at a reasonable 478g(including battery and SD memory card), resulting in a compact design, which is great for travel and everyday use. Tactile dials and buttons result in options for using manual controls, which are easy to access or the rear touchscreen for the majority of functionality. A black version of this camera is also available.

Manual dials and buttons have access to common camera functionality, along with new features including the front facing lever, providing the option to change between the electronic viewfinder and the optical viewfinder. A pull up and lock ISO control has also been included, along with weather proofing when using the ar-x100 adaptor ring or the protect filter.

Video functionality has also been increased to DCI 4K (4096×2160) at 30FPS and 200Mbps with 10 minutes of recording time and full HD achievable at 60FPS. Full HD recording (1920×1080) is achievable at 120FPS up to 6 minutes, depending on memory card speed and size limitations. Outputted video modes include .MOV files along with mapEG-4 AVC/H.264, with audio being recorded in stereo at 24bit/48KHz sampling.

An Optically improved, fixed 23mm f/2 (Mark II) prime lens is now available, coming with a 35mm equivalent focal length. Internal optics produce sharper images across the frame, while the nine blade aperture diaphragm can produce authentic bokeh renditions. Sensitivity levels coming at ISO160~12800, with the option of auto modes and can be expanded to ISO 80-51200.

Battery life on the Fujifilm X100V has been increased, allowing up to 350 shots with the EVF and 420 frames using the optical viewfinder. The USB-C port can be used for easy file transfer or remote control of the camera and all settings.

The top plate of the silver camera had been milled from a single piece of aluminium, resulting in a classic Fuji styled compact camera design, creating a seamless combination of form and function. This fifth iteration builds on the success of the X100 Series, with the X-Trans CMOS 4 sensor and X-Processor 4, along with a sharper lens, sporting a 23mm focal length and f/2 aperture.

Featuring 4K video at 30p without a crop adds to the professional qualities, with advanced video functionality for further tuning of footage. The Eterna Cinema Film Simulation is just one way to produce a final, finished look, for a seamless workflow in camera. Still images can also be rendered in camera with a variety of film simulations such as the Classic Neg film simulation, brought straight from the X-Pro 3.

The body features an Angular design, with a tactile, textured feel and very reminiscent of classic cameras. A new 3 inch tilting rear touchscreen has a resolution of 1.62 million dots resulting in brighter and clearer previews, along with tap focus AF points and adjustments to all the camera settings. The hybrid electronic viewfinder is now more efficient than ever with 3.69 million dots of resolution, with the option of using the 0.52x magnification optical viewfinder. In total, this is a worthy next step for the evolution of the line, with ever more functionality and quality of images.