If you’re an aerial photographer or videographer November 2021 is the time to celebrate as DJI updated their flagship consumer drone, with the release of the flagship Mavic 3. The Mavic 2 Pro launched back in 2018 so lets see what’s been updated and what’s new with the new model in our DJI Mavic 3 Specs First Look. 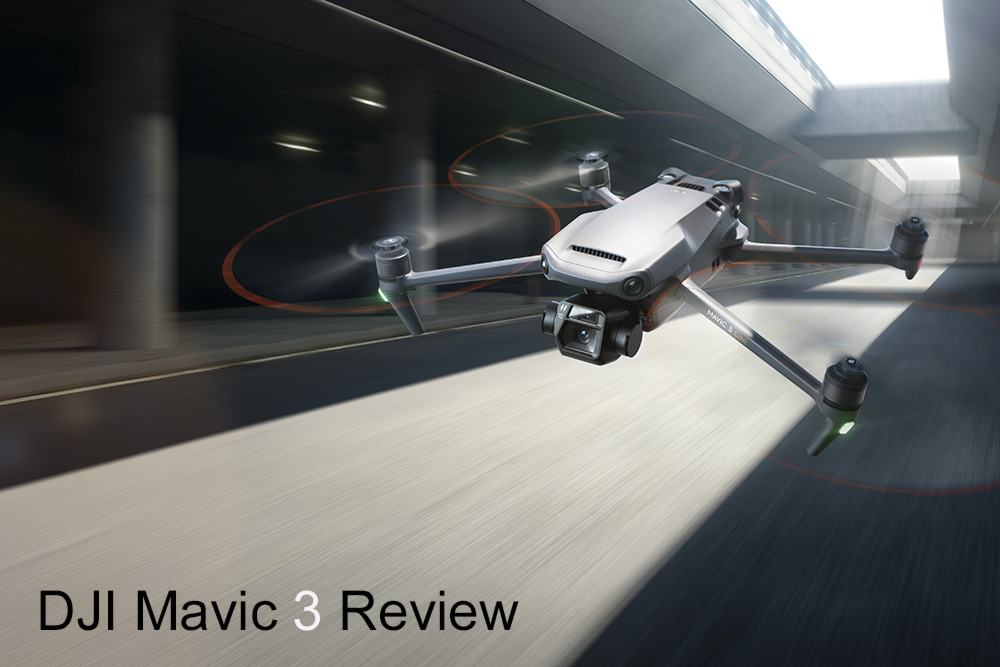 What versions of the Mavic 3 are available?

What’s the difference between the Mavic 3 Cine and regular Mavic 3 drone? DJI Mavic 3 Cine supports Apple ProRes 422 HQ encoding and comes with a built-in 1TB SSD for high-speed data storage. All other features are the same. However, when you’re getting either of the combos, you get different accessories included with each. Here’s the lowdown of what’s in the box for each of the new DJI Mavic 3 drone versions:

It’s worth noting that you cannot use DJI Goggles or the DJI Motion Controller with the Mavic 3, nor can you use simultaneous control by multiple remote controllers. 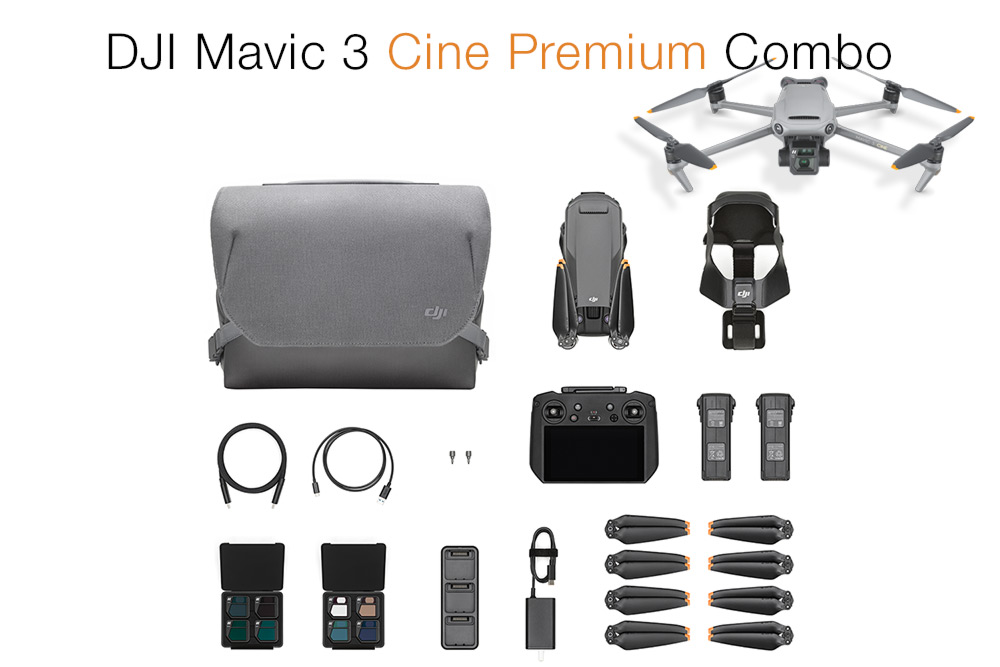 Who are these drones for?

If you process your movie footage with colour grading and need to draw out the best possible results from shadows and highlights, then the DJI Mavic 3 Cine Premium Combo is for you. It’s aimed at video professionals, enthusiasts, content creators with Youtube and other channels. Of course professional pilots may well be tempted for the longer flight times and improved object avoidance systems too, which means other aerial videographers will be drawn to the drone if they shoot real estate or other applications.

The standard Mavic 3 has a lot to offer enthusiasts and pilots who don’t need the ability to record in ProRes. In fact it’s identical aside from the ProRes codec and 1TB internal storage (which are very nice to have if you need them). Anyone who enjoys flying a highly agile and reasonably lightweight (900g or so) drone with amazing photo and video capabilities will be tempted. Picture quality from the new Hasselblad is improved with excellent colour, dynamic range and of course it offers superb video capabilities. If you create movies for clients, corporate videos or social media content then the ability to shoot 5.1K Video is awesome. There are plenty of slow motion options too such as DCI 4K/120fps to create sweeping cinematic hero scenes to wow your audience. If you do fly a bit or travel with your drones, the DJI Mavic 3 Fly More Combo is well worth considering. 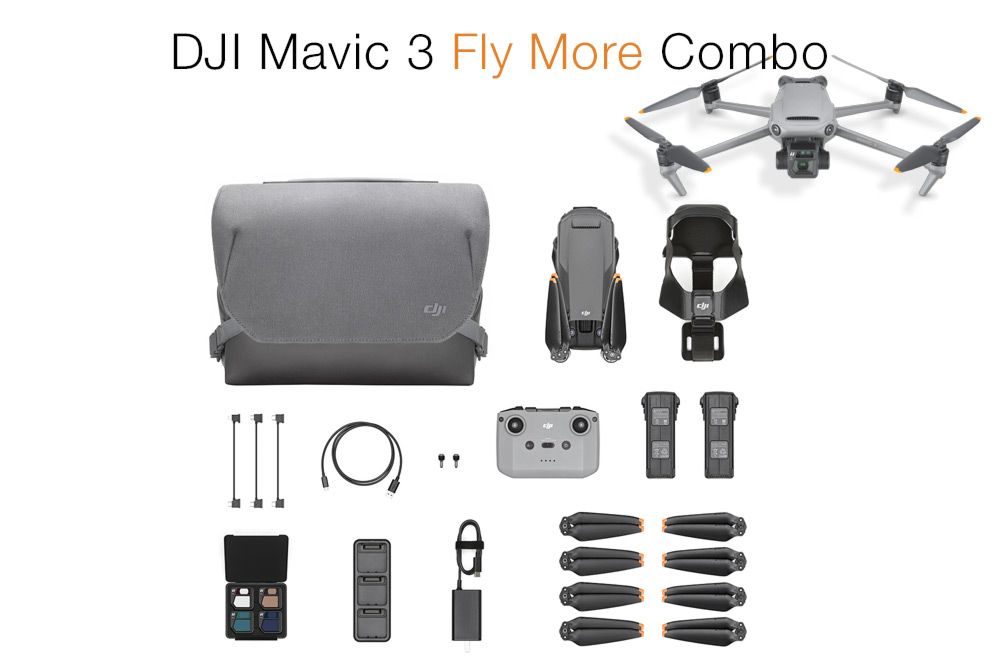 What are the key upgrades from the Mavic 2?

In addition to the camera system the updated Mavic 3 also delivers a comprehensively upgraded flight experience. Flight time has been extended to an impressive 46 minutes per battery. New O3+ technology has also been introduced enabling video transmission to reach up to 8 km when using either the DJI RC Pro or DJI RC-N1 Remote Controller.

Obstacle sensing has been developed into a truly omnidirectional system with more powerful APAS 5.0 and Advanced RTH (return to home) giving users greater peace of mind during flight. This updated feature finds the optimal RTH, conserving battery and flight time. 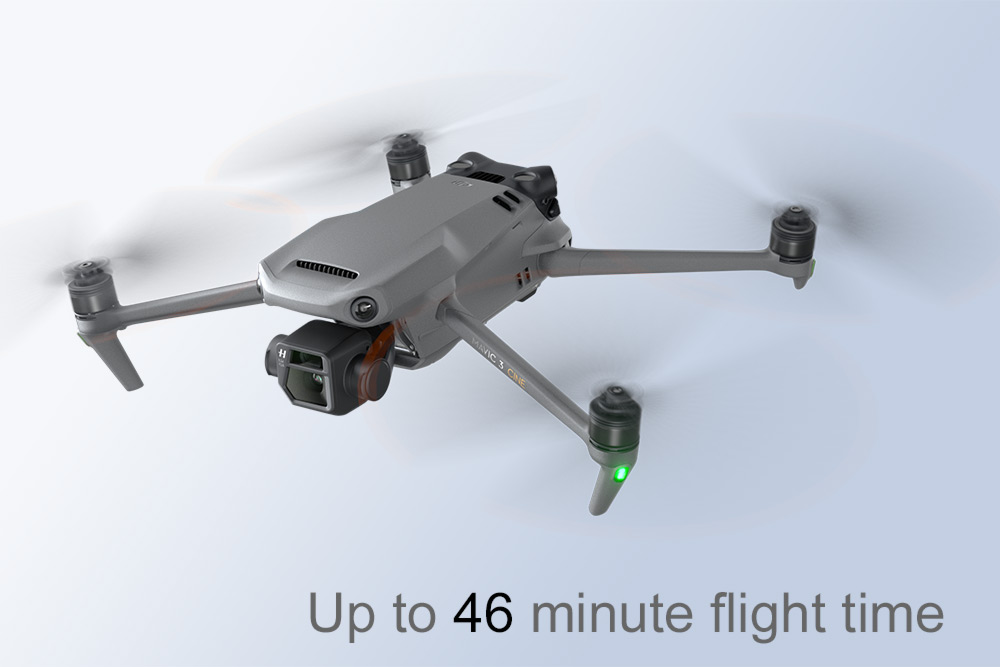 Mavic 3 now gives you 12km when using the DJI RC Pro or DJI RC-N1 Remote Controller where the Mavic 2 Pro was 10km. The live feed frame rate from the Mavic 3 will automatically switch to 48/50/60fps depending on your mobile phone decoding capability and transmission bandwidth.

Increased Flight time of 46 minutes, up from 31 minutes

It’s all about image quality and the new Hasselblad L2D-20c camera includes a larger Four Thirds sensor over the 1-inch Hasselblad L1D-20c Camera used previously. The Swedish brand’s imaging technology plays a large role in the results too and Hasselblad draws on many years of experience to capture beautiful images straight out of camera. This means you’ll need to spend less time editing in post and more time flying and capturing epic scenes.

The Mavic 3 propellers have been redesigned too, with the edges now made of a softer material. This serves a dual purpose to not only reduce flight noise but also causes less damage to people or objects in the event of an accident. 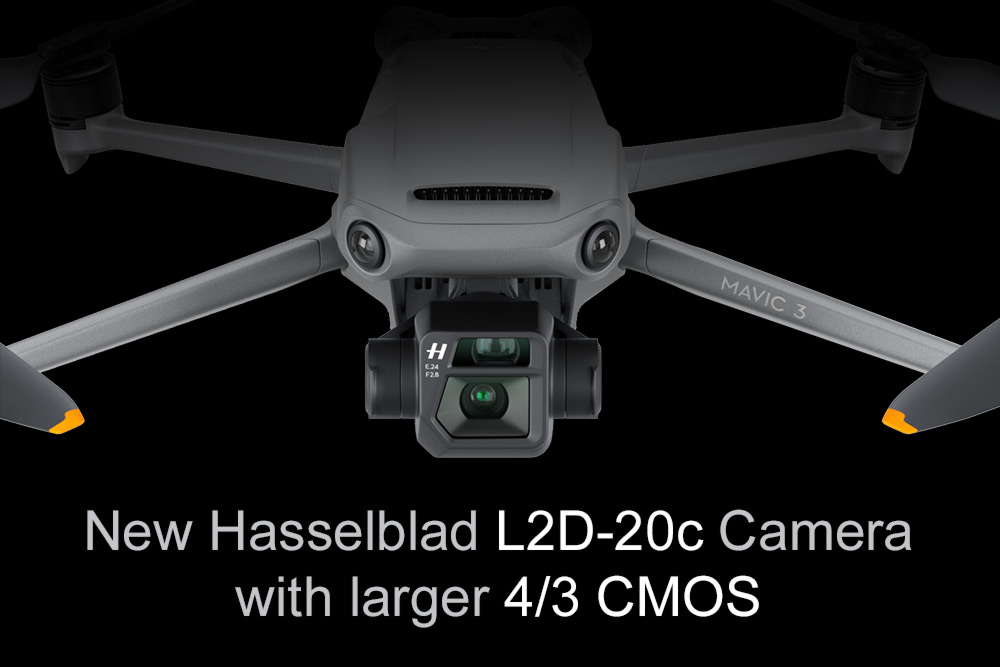 Object sensing improvements have been upgraded significantly as the DJI Mavic 3 can detect obstacles in all directions with extreme precision. Multiple sensing cameras with a wider range of detection respond to obstacles earlier and the Mavic 3 can avoid obstacles faster and more smoothly, capturing stable footage safely even when flying laterally or backward, in a well lit environment.

ActiveTrack 5.0 tracks subjects whether the aircraft is moving forward, backward, left, or right. Mavic 3 includes the newest subject recognition technology and ActiveTrack 5.0 uses multiple vision sensors simultaneously to recognise a subject, differentiate it from other objects, and lock the subject in frame. Mavic 3 is able to track in all directions and adjust tracking angles smoothly for more natural results. Thanks to new environment and subject sensing algorithms the drone responds earlier to subject movements and environment information, and plans a more optimum tracking route in advance to record smooth and stable footage.

How do you use the second Tele camera in the Mavic 3?

Switch to Explorer Mode and the Tele camera is enabled. The drone will also automatically switch to the Tele camera when the camera zoom exceeds 7x. You cannot take RAW photos with the Tele camera, nor will you be able to record Apple ProRes with the Cine drone. These features are only available with the Hasselblad. 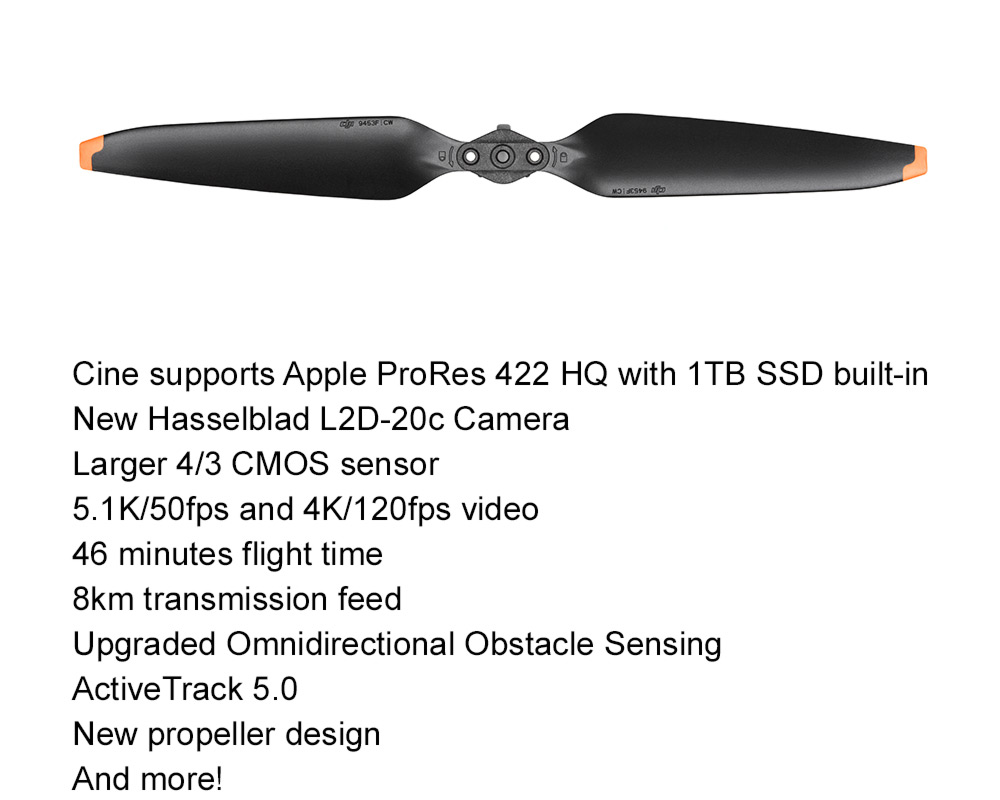 Has Advanced RTH been improved over the previous version?

DJI Mavic 3 has a maximum forward-sensing distance of 200 meters during RTH, compared to 20 metres on the previous model. A real time 3D map is created and used to determine the safest most energy-efficient flight route to return the drone to its home point.

Data transmission is even faster with download speeds reaching up to 80MB/s using new Wi-Fi 6 protocol. Mavic 3 automatically selects the fastest transmission mode based on the wireless environment without switching to Wi-Fi mode manually, making it easier to use than DJI Mini 2.

Charging the drone and flight batteries

It takes around 96 minutes to fully charge the drone battery when using the DJI 65W Portable Charger with an included USB-C cable. You can also charge the remote controller at the same time with another USB-A port and a USB-C data cable included in the package. You can even use other chargers, however DJI recommends using a charger with 60W or above which supports PPS/PD protocol.

The aircraft body also has a USB-C port which can be used to charge the battery directly. The Cine and Fly More combos both come with DJI’s Mavic 3 Battery Charging Hub, which will charge three batteries (also included) in sequence.

DJI released a host of accessories to accompany the new drone, many of which are included with the two combos listed above. Some of our other favourites include:

As their flagship consumer drone DJI has concentrated hard on the updated Mavic 3. It’s not only a better aircraft, but carries a better Hasselblad camera with a bigger 4/3 sensor and a lighter 24mm equivalent lens (it weighs just 13g). All of the background technology we don’t see has been updated too, for safer flying with better obstacle avoidance and improved O3+ Video Transmission.

Flight times are impressive with a considerable jump in performance to 46 minutes in favourable conditions. This will be ample for most users, particularly as you can charge three batteries with the triple charger which comes with both combos (or you can just buy spare Intelligent Flight Batteries of course).

The main Hasselblad camera is the big news with it’s bigger sensor, ability to change aperture and capture 12.8 Stops of Dynamic Range. Together with Hasselblad’s complex colour science the results can be spectacular with 20 megapixel photos and 100MP Panos. You can also record up to 5.1K movies which gives you the option to crop in as well as see high levels of detail in your footage. This is a drone for content creators who want to capture the best image quality possible from a competent drone which is safer and more enjoyable to fly.