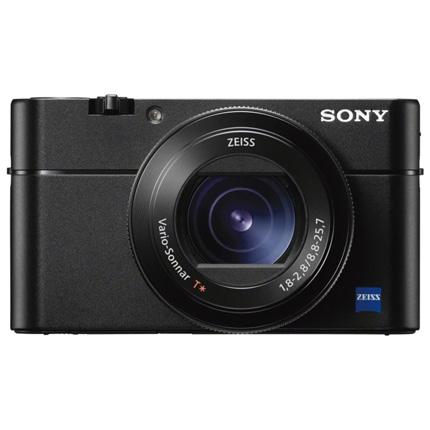 The RX100 V features the same super fast auto focus system as it's big brother, the a6500, which means it has the World's fastest autofocus system enabling it to lock focus as quick as 0.05 seconds thanks to a hybrid focal-plane phase detection AF and contrast detection AF. This is complimented by 315 dedicated AF points over 65% of the sensor's surface area, which gives the camera amazingly accurate and quick focusing, letting you capture the action even in unpredictable situations.

A new AF-A mode also now allows the camera to switch automatically between continuous and single-shot AF modes, and users can now manually select if they'd like the continuous AF and phase detection AF areas to be displayed live on screen while framing a shot.

Making full use of the 20.1MP 1.0-type CMOS sensor, the RX100 V features a new front-end LSI chip that supports the excellent BIONZ X processor to enable the camera to shoot at up to 24fps at full resolution for up to 150 shots with AF/AE tracking.

To make best use of this high-speed shooting mode, viewfinder blackout between shots has been minimised and silent shooting is also available.

In order to minimise the effect of  rolling shutter that is commonly experienced when shooting fast moving subjects, the RX100 V comes with a high speed Anti-Distortion Shutter up to a maximum speed of 1/32000 second. This means the camera can capture sharp, clear images at a wide open aperture and brightness levels up to EV19, allowing both photographers and videographers to capture gorgeous imagery that's sharply focussed even in challenging lighting conditions.

Built for both photographer and film makers, the RX100 V is great for even the most demanding video enthusiasts. With plenty of shooting flexibility thanks to the ability to adjust AF drive speed and AF tracking in the menu system, the focal plane phase detection AF sensor ensure accurate tracking and focusing even at the requirements of 4K footage.

Shooting in 4K, the RX100 V utilises full pixel readout without pixel binning for amazingly high quality footage thanks to the XAVC S codec recorded with minimal moire and jaggiesm at a high data rate of up to 100mbps at 4K and 50mbps at Full 1080p HD shooting.

Maintaining the standard set by its predecessor RX100 family, the RX100 V is a convenient pocket-sized design measuring only 101.6mm x 58.1mm x 41mm and weighing only 299g.

The RX100 is not only Wi-Fi and NFC compatible but is also equipped with a high-contrast 2.35 million dot XGA OLED Tru-Finder viewfinder which ensures true-to-life image previews and playback functionality. The EVF conveniently retracts in and out of the camera body to ensure the camera is as compact as possible when not in use.

The RX100 V follows on the RX100 family tradition of packing a lot of features into a very compact form factor.

With a 1.0-type 20MP sensor, the World's fastest AF acquisition speed of 0.05 seconds, and a shooting speed of 24fps at full resolution, the RX100 V boasts outstanding shooting performance for such a compact camera, but it's not just great at shooting stills.

Thanks to the fast Hybrid AF system, it will also shoot smooth 4K footage and will even do super-slow motion at up to 1000fps.

The range of features available means this camera is a great compact camera that can challenge larger cameras in terms of image quality, speed and performance.