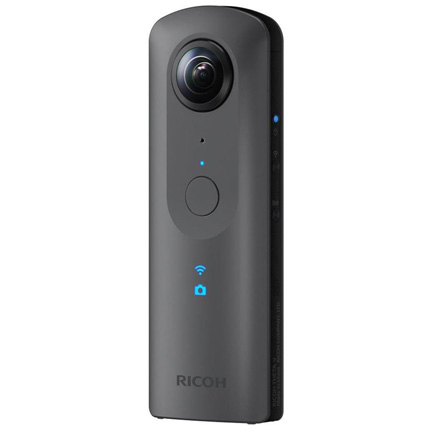 The advanced Ricoh Theta V has improved movies and can record 360 degree stills and 4K video as well as live stream to social media and capture sound from 4 independent microphones for spatial audio.

The Ricoh Theta V is a high-end 360-degree digital camera that offers a greatly improved experience over previous models. The Theta V will record 360-degree spherical videos in ultra-high definition 4K video at up to 30p, and capture 360-degree still images at an equivalent resolution of 14 megapixels.

With the Ricoh Theta V you can shoot high resolution still images that are equivalent to 14 megapixels and achieve lower noise thanks to a new algorithm that delivers high quality, high resolution in every scene from low to high sensitivity.

The Ricoh Theta V allows you to record ultra-high definition 4K videos at a resolution of 3840 x 1920 pixels at a frame rate of up to 30p with an output of 56Mbps. This gives you high quality 360 degree realistic spherical videos that are shot in high definition 4K resolution.

A new microphone with 4 built-in microphones gives you the ability to record independent 4-channel audio from four different directions, which is then converted to a format that recreates natural 360degree spatial audio to accompany your 4K spherical videos.

Whether you use the Google Play Store or the Apple App Store, there are dedicated apps available to be used with the Ricoh Theta V that allow you to control the camera easily and enable editing and sharing of your video and image content.

The Theta V can now be used with social media platforms including YouTube and Facebook to live-stream ultra-high definition 4K video at 30p in a fully spherical 360-degree format. This footage can then be viewed from anywhere in the world and even viewed using Virtual Reality headsets for an immersive viewing experience.

The Theta V gives you the ability to play back 4K video and still images in-body and by using the Miracast wireless display adaptor you can share spherical images easily to a TV or projector.

The 360-degree 4K video and images the Theta V produces are handled with ease by the Qualcomm Snapdragon image processing engine that delivers a range of improvements over the previous model, including faster image processing, faster wireless transfer speed, and better power saving capabilities.

By running the Android operating system, the Ricoh Theta V will be ready for future upgrades and add-ons. As expected, the software is also open source with developers in mind.

When used with the Ricoh Theta V, this optional 4-channel multi-direction microphone records 360-degree spatial audio that gives your 360-degree 4K video realistic audio of a much higher quality.

Built exclusively for the Ricoh Theta V, the TW-1 underwater housing offers 30 metres of waterproofing (JIS Class 8) to capture 360-degree 4K videos underwater. The case is a hard coat and AR coat treated on the surface and comes with a carry case, strap, scratch protection sheet and anti-condensation sheet.