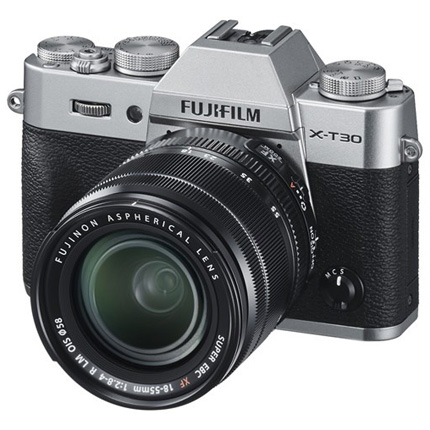 The X-T30  takes full advantage of the capability of these fourth-generation devices to deliver a significant performance improvement. Previously only available in the X-T3

The live view display can also be set to the ‘Preview Pic Effect' option to reflect the shooting conditions and offer a natural view close to that of the naked eye. The viewfinder's eye sensor automatically orientates the information when the camera is held vertically; something that's not possible on models with optical viewfinders.

(3) The “Classic Chrome Effect," previously only available in FUJIFILM's  X-T3 is featured in the X-T30. The effect produces deeper colors and gradation in subjects with highly saturated colors, such as vivid-colored flowers with shadows, a notoriously difficult photo subject for gradation reproduction. The high-speed processing power of the X-Processor 4 means this effect can be applied not only in siangle shots but also in continuous shooting.

Highly adaptable to suit your range of subjects

This short zoom lens covers a variety of frequently-used focal lengths from 18mm wide-angle to 55mm telephoto. The lens structure consists of 14 elements in 10 groups, including 3 aspheric and 1 extraa low dispersion elements, and a 7-blade rounded diaphragm. The linear motor-driven system delivers highspeed autofocus performance of 0.1 seconds to capture those perfect photo opportunities. advanced optical and mechanical designs have been used to keep the lens compact, despite offering fast aperture of F2.8 - 4.0 wide open.