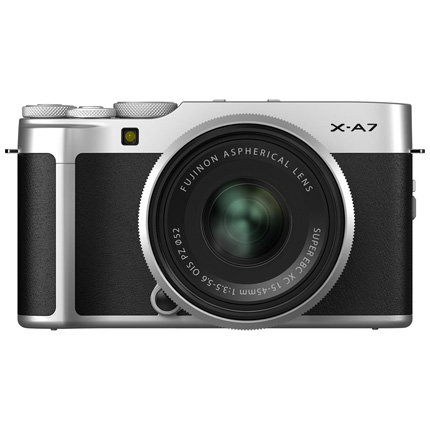 The X-A7 is Fujifilm's latest camera to join the X-Series family: a mirrorless camera that captures beautiful stills and videos with astonishing quality and ease of use.

Carrying Fujifilm's own APS-C CMOS sensor in a camera body weighing just 320g, the FUJIFILM X-A7 instantly focuses on faces and eyes, for portraits, action and movies, and produces stunning colour even in low light. The X-A7 offers professional video features including smooth 4K movies and high-speed capture for epic playback. It offers easy touch and tap functionality on the large articulating screen – ideal for content creators and vloggers.

This gives the camera very fast, accurate AF capable of quickly detecting and tracking eyes and faces even in low light. The X-A7 also features smooth 4K, high speed video and advanced high-ISO capabilities never before seen in this class of camera. Such advanced features are packed into the compact camera body that weighs just 320g, making it a great choice as a true ‘go-anywhere' camera producing stunning still images and high-end movies for content creators and vloggers.

The sensor features 8.5 times more phase detection pixels across its surface than previous sensors. This has delivered a dramatic improvement in performance for Face/Eye Detection, when tracking moving subjects, and when focusing in low light. The use of copper wiring reduces digital noise, providing approximately one stop improvement in image quality at high ISO levels compared to previous sensors. A significant improvement in data readout speed enables a smooth frame rate of 30fps when recording 4K video, substantially reducing the rolling shutter effect, which typically occurs when recording fast moving subjects.

The camera features a large 3.5" 16:9 touchscreen LCD with brightness equivalent to most smartphones, enabling a clear view on the display even when using it in bright daylight. The display uses a new “Smart Menu", allowing shooting settings to be changed easily and intuitively. Quickly adjust settings such as brightness, degree of background blur, Film Simulations and aspect ratios with a tap on the LCD, while being able to see what the effect will be on screen in real time. The display has the touch response performance equivalent to smartphones, in order to change menu items instinctively and simply. The vari angle display accommodates a wide range of shooting positions including high angle, low angle and self portrait. The aspect ratios supported include 3:2, 16:9, 1:1 and 4:3, newly adopted in the X A7.

Despite featuring a large 3.5 touchscreen LCD, the X A7 weighs only 455g with the kit lens (XC15 45mmF3.5 5.6 OIS) attached. The X A7 can shoot approx. 440 pictures per charge facilitating long term use without worrying about the battery.

The image sensor produces 4K (3820x2150) footage using data equal to 6K (6032x3392), which results in high resolution video quality with lower noise, and delivering smooth 4K video at up to 30fps with no crop. Create movies in Full HD or HD, at up to 60p in full screen 16:9 aspect ratio or the popular 1:1 square format for easy live story posting on social media.
“Countdown Video" mode has been added, which is helpful when uploading videos to social media. Videos are filmed for a pre selected duration: 15, 30 or 60 seconds, with the remaining time for the clip appearing on the screen. HD high speed video capture at up to 4x speed easily produces epic slow motion results of action.

A new [Bright Mode] feature has been added to the [advanced SR Auto] function, letting the camera configure ideal settings to produce HDR and other options that create brighter and more vivid images in a siangle, one touch operation. The [Light Trail] mode, added to the [Scene Position] selection, can be used to capture light trails of car headlights, for example, while checking the effect on the LCD in real time.