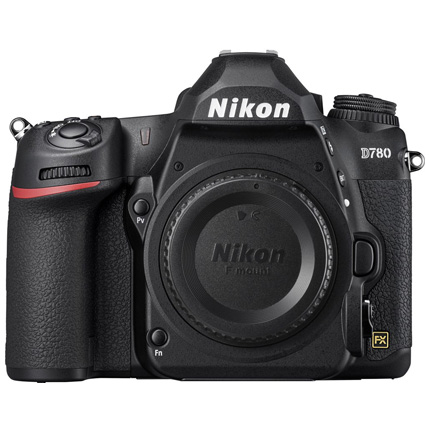 The D780 gives you everything you’d expect from a pro-calibre DSLR, and then some. A clear view. A long battery life. A tough build. Plus two fast, reliable AF systems, phenomenal tracking, wide ISO range, and more.

The full-frame Nikon D780 DSLR camera body has been released around five years after its' predecessor. This is a significant release for Nikon, with a highly capable 24.5MP body for the enthusiast market sporting a host of upgrades over the previous model.

Highlights of the new D780 include a dedicated hybrid AF system for live view shooting with an exceptionally fast 51-point phase detect system. This has been incorporated from the acclaimed mirrorless Z6 system, with eye detection and accurate focusing down to -6EV.

The new D780 is also quicker, with up to 7fps through the optical viewfinder and 12fps in live view, ideal for capturing the perfect shot whatever speed your subject is moving at.

Filmmakers have been well considered with 4K UHD capabilities at up to 30p in full-frame with no cropping. An external movie recorder can now capture HLG HDR footage and an articulated TFT LCD tilting touchscreen assists with easier composing.

AF in live view.The 273-point Hybrid-AF system is sensitive down to -4 EV, or down to -6 EV in low-light

Up to 12fps burst.Shoot at up to 7 fps with AF/AE, or up to 12 fps in Silent Live View Photography mode.

Nikon have consistently surprised us in the past with new camera bodies surpassing expectations. The D780 achieves the same with high quality 24.5MP stills provided by the CMOS sensor capable of capturing superbly detailed images which are processed by the Expeed 6 image processor.

Flagship tracking performance is provided through the viewfinder, which also enables quick switching between the advanced AF modes. The blazingly quick shutter speed of 1/8000 also gives speed light users the ability to sync with Nikon flashguns capturing motion travelling at virtually any speed.

Robert Harmon, Senior Commercial Planning Manager, Nikon UK, says: “Many photographers love DSLR, and they've been waiting for a model like the D780. If you're a DSLR lover, and you want to shoot movies as well as stills, this is the perfect solution. If you want to explore mirrorless, we have the Z system for that too! Whichever system excites image makers, we're thrilled to offer the versatility that lets them create without limits."

This camera combines Nikon's most advanced technology from their entire suite of systems. With incorporated mirrorless eye detect AF from the Z6 and ultra fast live view burst shooting, DSLR users can now rest assured they have an advanced body capable of excelling at anything they can throw at it.