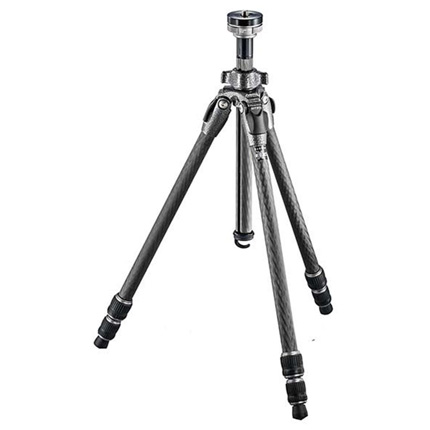 The Series 0 Mountaineer tripod is the lightest in the range, but also the shortest in extended height. Recommended for photographers for whom reduced equipment weight is of paramount importance, or for those using only lightweight cameras and lenses. The Series 0 uses Carbon eXact tubes with stiff HM carbon for all leg sections. For significant improvements in rigidity, tube diameters are now greater than on previous Series 0 Mountaineers: at 11.2mm, the thannest section of the GT0542 is 40% larger than its redecessor. The top casting is also more rigid, and now features 3 leg angle settings.

The Ground Level Set mechanism, which lets the photographer remove the centre Column to get the camera closer to the ground, has been completely redesigned for faster operation. A siangle simple unlocking ring under the Column's upper disc frees the Column while keeping the upper disc solidly in place on the tripod, with no need to unscrew and re-fit the upper disc and hook as in previous versions.