Sony a9 A Mirrorless Camera for Professionals

With the introduction of the Sony a7 range of Full-Frame cameras the gauntlet was really laid down by Sony - with their smaller footprint, ability to use lens adaptors for old or alternative brand lenses to be attached and an ever increasing range of exceptional original manufacturer lenses.

Since this range was introduced there has been an influx of 'Why I made the move to Sony/Fuji/Olympus' articles from professional photographers from all kinds of environments, which is the kind of ringing endorsement all these manufacturers want to see.

The one field that Mirrorless has found a bit harder to satisfy is the one where they require something that focuses fast, and shoots just as rapidly. The Olympus OM-D E-M1 Mark II was the first of this type to answer more of those critics, and the Sony a9 has now burst onto the scene to offer up their version of this. This isn't the only feature tempting photographers towards the Sony Mirrorless bandwagon - it's almost as if they've listened to everything that has been previously discussed as a negative in the past and rectified it.

This is undoubtedly the 'game-changer' for the a9.

Although previously professional snappers have been moving towards the a7 it has been limited to those who don't require the fastest of image capture - a wedding, street or studio photographer won't necessarily require the speediest cameras.

We declared the Olympus O-MD E-M1 Mark II a game changer for sports and wildlife photography back in September when the flagship Olympus mirrorless camera was unveiled at Photokina 2016 with its 15 fps capability in continuous mode.

At 20fps with full AF/AE tracking the Sony a9 puts it above Digital SLR cameras of a similar stature - meaning that both this camera and the Olympus E-M1 Mark II have opened up the smaller form camera to those in this field of photography.

There is also the element that Sony claim to have eliminated shutter blackout in this mode - something that has been found in Mirrorless cameras in the past, where there was a bit of lag in the EVF making tracking your subject a trickier affair than when using an optical viewfinder found on a DSLR.

It isn't just about that 20fps figure either, what is pretty outstanding is the built-in RAM that is capable of letting you shoot 241 14-bit uncompressed RAW images in a go, or for those not bothered about post-production an absolutely staggering 362 JPEGs. It's a dream number of images, although a nightmare for those who have to sort through them all after an intense session of shooting.

As above really, with a need for capturing those things that move faster than a bride who is weighed down by nerves and a heavy wedding dress, or a model who wouldn't get out of bed for less than £10,000.

AF has a huge part to play in continuous shooting - as it is no good taking 20 pictures in a burst if the camera can't actually track that subject for those 20 images. So with full AF/AE lock tracking at shutter speeds greater than 1/125s you can be safe in the knowledge that it can keep up.

A subtle change to the rear controls on the a9 over the a7 range is the additional focus joystick now present - this is something pro photographers who have used Canon or Nikon cameras in the past will be familiar with. DSLRs are absolute beasts when it comes to battery life, owing to the fact that their larger form can cope with a larger battery and they don't have an Electronic viewfinder to sap energy either.

This doesn't really affect the average mirrorless camera user as they will be quite content with the few hundred shots they can get from a single battery, however to be a player in the pro-market you are going to have to be able to offer something more punchy.

The Sony a9 does this. With a battery claiming to be roughly 2.2x the power of the older variety found in all a7 cameras, this camera can now offer 480 shots on a single charge - all whilst using the EVF, and 650 using the live-view LCD - which itself now offers touch focusing. Electronic viewfinders aren't everybody's cup of tea, as it will be incredibly difficult for something electronic to mimic the optical viewfinder's actual real-life as you see it capabilities.

One thing sitting firmly in the positive corner for EVFs is the ability to see the actual shot that is being composed, so if your settings are slightly off you will know it - your picture will be as you see it. Probably not a huge issue for professional photographers who aren't amateur enough to over or under expose, but a huge boon for the wealthy amateur.

This EVF packs a punch too, and raises the standard to those found in the Leica SL and the recent mirrorless medium format Fuji GFX-50S.

With 3,686k dots (or 3.68-million) the 'Tru-Finder' is bridging that gap between optical and electronic, and has twice the luminance of the EVF found in the Sony a7R II.

Sony themselves tout this as a more natural experience, which crushes the arguments against EVF use. A simple yet effective addition to the Sony a9 to make sure it is pro-standard is the dual SD card slot, one of which can handle the faster UHS-II standard of SD cards for faster writing of images to the card - which will go a long way to help grabbing those 240-plus RAW images in one go.

This again is a feature aimed towards the pro user as shooting in RAW obviously takes its toll on your memory cards owing to the larger nature of the files output from the camera - either way you shouldn't be running out of capacity too soon.

The same applies for 4k-resolution videos and their memory intense requirements - the Dual SD Card slot will certainly come in handy. A slight red herring here as this isn't a new and improved feature in the a9.

The 5-axis stabilisation has been a mainstay of the a7 family since the introduction of the Sony a7 II to the market in 2014.

This makes for some absolutely excellent low-light and handheld shooting capabilities from this camera and is also one of the reasons why their cameras have been so popular a choice for mounting weird and wonderful lenses from yesteryear on. (Like the time we chucked the Canon Dream Lens on the Sony a7 II).

This image stabilisation is also great for people wanting to shoot video, as it makes for a greater handheld experience when filming means that people aren't watching the Blair Witch Project when they're viewing your footage.

Sony are often at the forefront of video technology as it has been their bread and butter for numerous years, and 4K video is captured at its highest possible quality within the a9 thanks to its lack of pixel binning and oversampling at 6K.

Effectively this means you are recording footage in 6K which is then shrunk down to 4K to maximise quality potential. It also means you can use all of the sensor to record footage, as 4K actually requires a smaller amount of the sensor than the sensor can offer (if that makes sense!?).

The average Joe isn't going to be too fussed about the new Ethernet port built into the side of this camera, but the not-so average photographer is going to be delighted that they can plug their camera into a reliable source of bandwidth to transfer their photos via FTP or FTPS (for encryption).

Another feature that will have been well considered by Sony when building this camera, as many people they want to attract will require sending of images to either an agency or newsroom to earn their keep.

The inclusion of 'My Menu' is another clever move from Sony, as they know to keep up with the needs of the professional they will need to offer a custom menu system to suit their user's requirements.

One photographer may find it very useful to switch between focus modes whereas another may want to format their cards regularly - either way 'My Menu' gives that freedom of choice.

This goes hand in hand with the ever increasing number of custom buttons adorned on to the front and rear of their higher end mirrorless cameras! 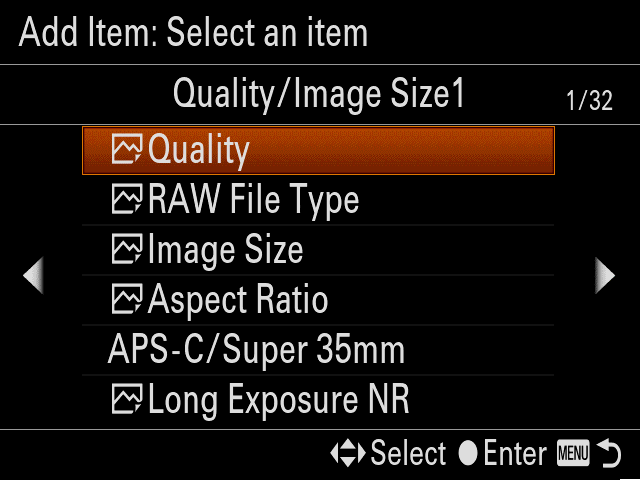 The camera looks-wise isn't a huge surprise - literally. It doesn't stand out as a massively different looking camera to the a7 series, but if it ain't broke.....

In fact, the body itself is only different in that it is 0.1mm shorter than the a7R II and 8% heavier.

What does that 8% equate to? Well, it is the difference between 673g and 625g - so a not so much heavier 48g difference (I'd like to think of this as a generous bowl of cereal minus the milk).

Once again we see a magnesium alloy body for weather proofing, with a rear tiltable LCD screen that isn't fully articulated.

We already mentioned the new focusing joystick on the back of the camera, which is joined by an additional dial to change drive mode - which is obviously appropriate with the theme of shooting speed.

Thankfully at launch, a touch of genius, there was the exciting announcement of a new G-Master lens; the Sony FE 100-400mm f/4.5-5.6 GM OSS telephoto lens.

This is the longest lens available for Sony's E-mount, but undoubtedly not the last of this focal range that we will see now we have a viable camera for its use.

It joins the other G-Master lenses, which are Sony's attempt to corner the pro market with exceptional optical quality and lens build suited to the great outdoors.

Other G-Master lenses include an 85mm f/1.4, 24-70mm f/2.8 and 70-200mm - all focal lengths that you would expect to see from a manufacturer who want to corner every possible market available to them.

Sony have been bolstering the E-mount range for the last couple of years, and now have a more than respectable range of excellent optics - as well as the superb stuff that ZEISS have been releasing, namely their Batis range which recently saw the lovely ultra-wide angle ZEISS Batis 18mm f/2.8 lens released.

Take a look at our lens buying guide to see some of the exceptional lenses available to you if you make the switch to Sony's a9. The Sony a9 will be available from Park Cameras as soon as it is released in June of this year.

Sony a9 vs Sony a7 Series Comparison