We've recently updated our blog with 2 guides on live music and concert photography, written by our resident blogger and music photographer Ashley Laurence.

You can read our guides here: 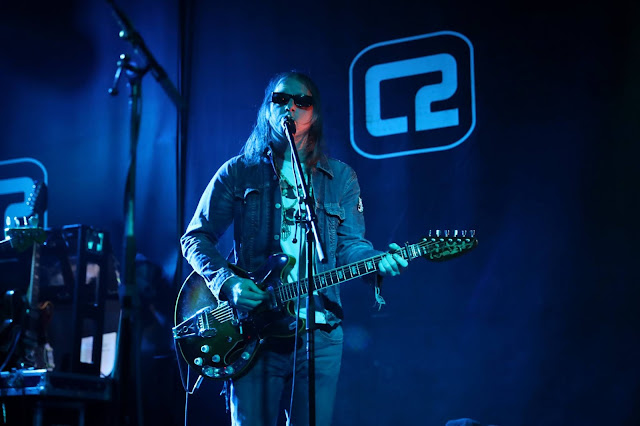 This rock photography article is part of a series of 4, with 2 further, shorter appendices on tips and gear. You may wish to also visit these

This is part 3 and like the others it hinges on a few ideas I've had regarding light required for concert photography (which over the last year have changed but largely remain true), aperture and ISO, plus of course the grainy finish which this gives as quality get traded in against sharpness.

As I learn my camera(s) foibles I also become familiar with what shooting without flash does and this hangs me perpetually on the very brink of concert pictures acceptability.

I'll also be talking about my disasterous use of a Canon Powershot G10 at one gig and the then very successful use of the same camer at others, plus my reluctance to upgrade to the Canon Powershot G11, trading resolution for quality (yes you read that right).

An example of this being this awful image show here which is a result of shooting a band (the well know 80's band 'A Flock of Seaguls') in Brighton, in not great light (but still not bad) at 2.8, using the G10 because I would not have been able to take my 5D.

When I started rock photography I was reluctant to push my ISO higher that 200 if indoors .... or 400 at a push. The reason being a preconception regarding perfection and graininess.

The images were awful except for a handful which were actually very good through fluke. Once I took this daft idea and transposed it wider into my rock photography I was immediately transported into a world of pain, heartache and wasted effort.

It was only when I realised the degree to which our human eyes adjust constantly in lower light environments did it become clear what was happening.

My subjective experience of light was what was preventing me from judging the best ISO.

In low light photography I sometimes shoot at ISO settings as high as 3200 ISO and even higher if the light is particularly bad.

Anything above this is past the point of acceptability but software can remove noise levels below this. Final images require untold levels of work and are still prone to colour and luminance noise. Personally, if this is going to happen I would prefer black and white.

The image shown here is what happens when you try to shoot at too slow a shutter speed. I was at maximum aperture at 3 stops too slow on the ISO and the net result is I had to have a shutter speed which was far too slow.

I like this image but it should be mentioned that that is another fluke. I have hundreds like this that I hate

Filling the frame. The substance of good concert pictures.

One of the mistakes I used to make was not thinking composition. Not being concious of the edge of the image in the viewfinder for no reason other than the area was dark.

I wasnt sure and I didnt think about it. Probably because I also was not holding the camera up to my eye properly.

This meant that I was safely putting every subject well within the frame and not filling the frame. This means I end up cropping in a lot, losing resolution. Nice to have the safety of this in the darkroom, but realistically is probably quite unnecessary.

What was interesting was that this occurred at certain concerts more than others. Take from that what you will but that will be down to a frame of mind rather than something technical or an unknown rock photography technique.

When I'm reviewing the concert pictures after the gig I generally delete those shots but here's one that slipped through the net.

As you can see there's a whole load of space not being used to tell the story of this chaps activities. Probably 20% at the top of the frame.